Special agent Lin Dong (Jackie Chan) suffers a huge personal loss during an assignment to protect a powerful witness. Years later, a mysterious and sinister gang returns to haunt him and Nancy (Ouyang Nana) – a young lady whom Lin attempts to protect at all costs in an adrenalin-pumping and action-packed pursuit.

Tiffany Yong: This is the second Jackie Chan film within 3 months and I was thrilled at the thought of Jackie Chan doing a sci-fi action flick (something I don’t recall him doing). However, le boyfriend was (surprisingly) not really impressed with the trailer. But thanks to Clover Films, we’ve got a chance to catch this early, and I’m happy to say, while Bleeding Steel ain’t a perfect film, we were pretty impressed with the performance! 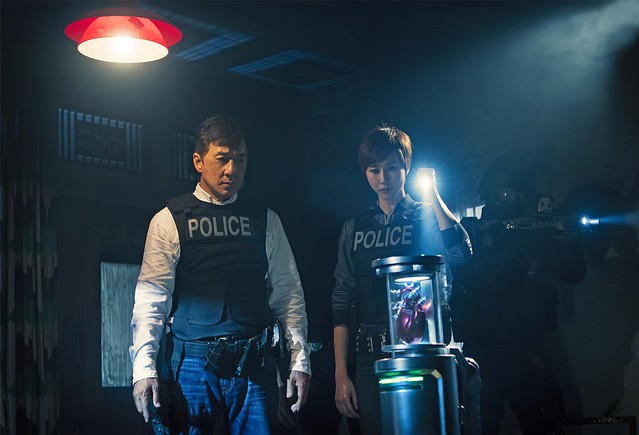 Peps Goh: The entirety of the plot of this film isn’t the most cohesive, with little sub-plots that doesn’t really add up or feel completely necessary. For example, the magician that was recommended by the gypsy hypnotherapist unlocked her memory feels introduced out of left field, and after being blatantly used as a plot tool to regain her memory moving the plot forward, and so as to have a fight sequence be located at the top of the grand Sydney Opera House (admittedly I really like that sequence), the magician was killed off as abruptly as he was introduced. Without any direct relevance to the main story, he felt like complete non-sequitur placed there only out of convenience. Ouyang Nana’s performance as Nancy paled in comparison amongst the veteran actors, but she did do a pretty good job for the moment where she found back her memories. 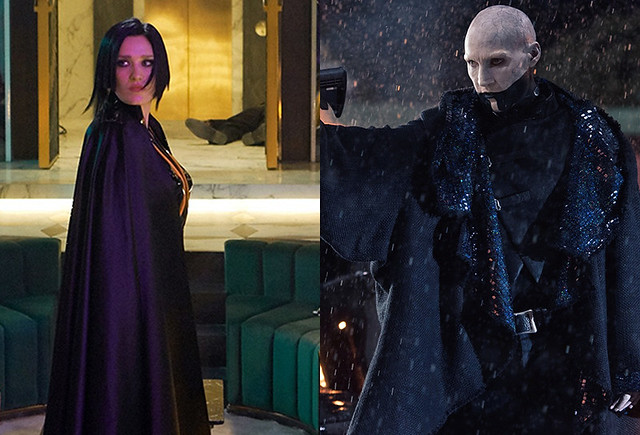 Tiffany Yong: Ridley Scott’s Alien: Covenant actress Tess Haubrich and Callan Mulvey who played Anatoli Knyazev in Batman v Superman are the main antagonists for the film as a nameless sidekick and Andrew – a failed robotics-enhanced human(?). While the action sequences were amazingly-violent, I was disappointed by the lack of convincing character establishment for these strong characters. The white (literally!) man-robot looked like a combination of Zordon (from Power Rangers) and Lord Voldemort (from Harry Potter), and I simply couldn’t understand why would Tess Haubrich’s character be his sidekick. Was she a bio-enhanced human as well? Or was she depending on the technology / steel heart to survive? The design of the costumes were pretty cool but somehow not in sync with the rest of the film.

Peps Goh: Apart from that, the writing was good and had a few nice twists. It had moments that genuinely touched me, balanced nicely within it’s fun comedic sequence that was planted frequently and tastefully through the span of the film. It always affects me seeing Jackie Chan upset in films. I practically grew up watching and loving his films and the characters he portray. At this point my brain recognizes him as something like a grandparent figure, and seeing him sad in this film makes me sad. 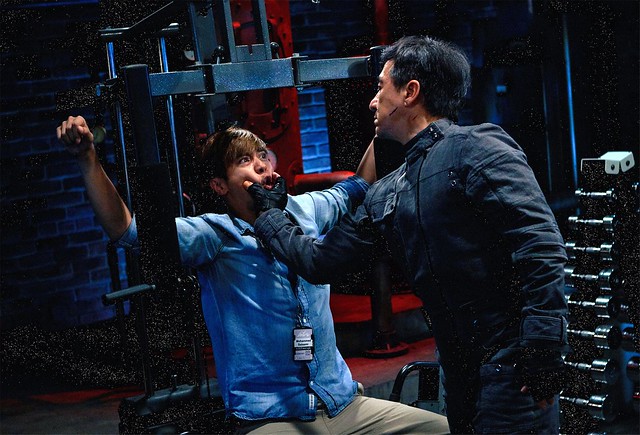 Tiffany Yong: Show Lo is well-known for being the handsome comic relief in the films he appeared in. He shined here once again, with his goofy attempts to be involved in the rescue mission, in good comic timing. The only fly in the ointment was the choppy editing which created certain unexplainable odd gaps in his appearance as well as skill set.

Peps Goh: The action in this film explores a wide range of inspirations. Unlike The Foreigner where the skill sets were streamlined and all in theme with a combat physics slightly more grounded in reality, Bleeding Steel features several vastly different styles. One of which is the gun grappling sequence of 1 versus many, and with portions with obvious applications of Brazilian JuJitsu techniques, making it feel reminiscent of John Wick. And the combination of the tricking infused acrobatic combat paired to long dynamic moving shots, feels like tip of the hat to Kingsman‘s style. All of which are sprinkled with Jackie Chan’s signature flavor, albeit a little more violent than usual. They are definitely a very fun watch. 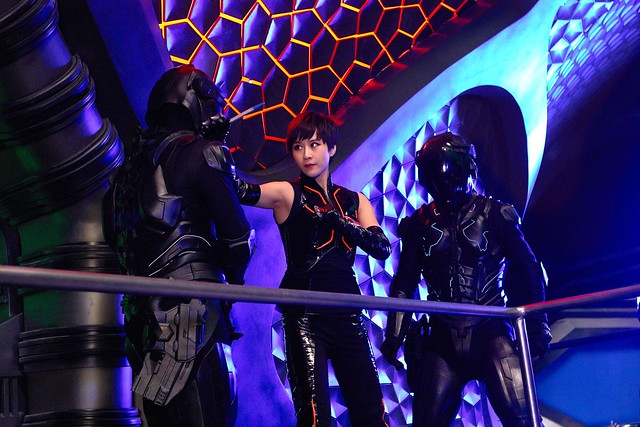 Peps Goh: (Here comes something geeky) There was a part in the climatic fight scene that threw me out of immersion and gave me a good laugh. It was an acrobatic sequence (done by the character Susan aka Erica Xia-Hou) that Martial Arts Tricking Practitioners might recognize as a C9 round kick to TD Raiz to Corkscrew round out combo. Have you ever seen someone TD Raiz so hard that their biceps grew 10 inches in diameter? Haha I thought that was funny. Her stunt double was either a man or a well-build female athlete.

A shoutout to him/her, if you are reading this, you have got a really nice air-form, kudos to that gorgeous box-cutter, it was clean as heck, 10/10. (for audiences: that is the name of a flip where you take-off into a backward somersault by kicking one leg really hard, and in the middle of the flip when you are upside down, executing a 360 degrees twist, and before landing, AND throwing the back leg out in a hook kick before the front leg lands. It is a REALLY tough maneuver, and an even tougher move to pull off WELL in slow-motion. Mistakes in one’s air-form becomes really obvious in slow-motion, so he/she had to pull it off impeccably)

Tiffany Yong: So… here comes the million dollar question, is it better than Jackie Chan’s last film? Bleeding Steel has a better balance of action, humour and touching scenes, but is weaker than ‘The Foreigner’ in terms of story depth, cohesive writing and character development. As the two films are quite different in terms of genre, it is pretty difficult to give a definite answer.

Depending on your personal preference, The Foreigner makes a more artistic and emotional watch, while Bleeding Steel is a more fun and entertaining film! 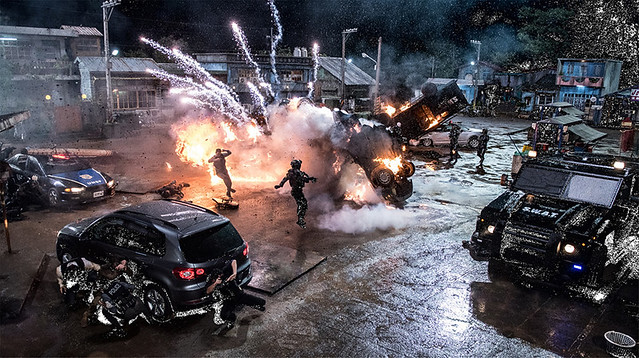 The pre-production took more than 3 years to get ready. The film was initially proposed to be into a ‘traditionally Jackie Chan style’, however, both director Leo Zhang and Jackie Chan were not satisfied, until the director added in more new elements into the story. The production team flew to Sydney and Taipei to film. They used real guns and ammunition during the filming. About 40-50 guns, tens of thousands of bullets and 100kg of TNT explosives were imported directly from America. During the explosion, the actors would have to be very close to explosion, most of the time they are less than 1m to 2m apart. It is the most expensive Chinese film ever to be shot in Australia. 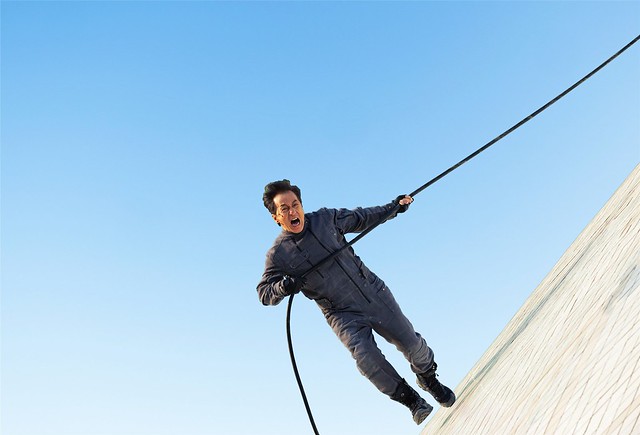 Jackie Chan ‘conquered’ the Sydney Opera house in this film and became the first action star to fight on the roof top of this iconic building. As it takes at least 30 minutes to get from the ground to the rooftop of the Sydney Opera House, Jackie Chan revealed how he did not dare to drink too much water, as it will delay the filming process. There was very little space to film on the rooftop hence it was pretty dangerous. Jackie Chan did 99% of the scenes in this film himself. 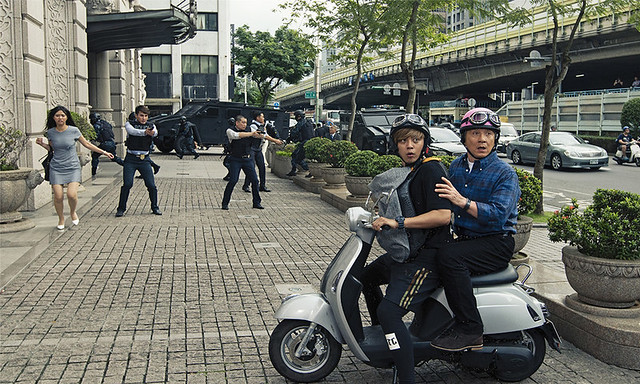 Ouyang Nana revealed that Show Luo was so nervous on the first day he met Jackie Chan on the shoot that he hid behind the tree, not daring to come out. However, both of them became very good friends within a short time, and Show Luo was asked to use a body double for a fight scene where he needs to do a roll in a helmet, but he insist in doing it himself. During one of the scenes, he knocked against the glass so hard that the helmet broke. 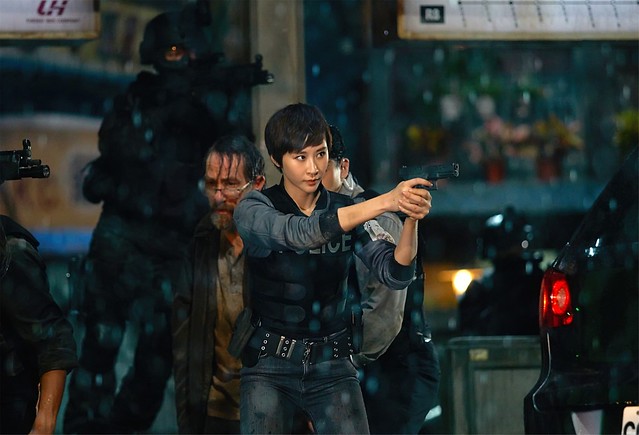 Erica Xia-Hou 夏侯云姗 injured her head during an explosion scene, but she insisted to finish the filming with the gun in one hand and the other covering the injury.