The Foreigner starring Jackie Chan and Pierce Brosnan, is a timely action thriller from the director of “Casino Royale.” The film tells the story of humble London businessman Quan (Chan), whose long-buried past erupts in a revenge-fueled vendetta when the only person left for him to love – his teenage daughter (Katie Leung) – is taken from him in a senseless act of politically-motivated terrorism. In his relentless search for the identity of the terrorists, Quan is forced into a cat-and-mouse conflict with a British government official (Brosnan), whose own past may hold clues to the identities of the elusive killers.

Both Peps and I loved the trailer. The soundtrack was en pointe. When Erica from Clover Films sent me the tickets, I got a little worried that it would disappoint. I’m glad Jackie Chan didn’t. People who had read my past few reviews of Jackie Chan’s works might recall that I wrote that I’m not a fan of his films. For this film, I take back my words. I enjoy watching films where he was not doing to much of his slapstick action. 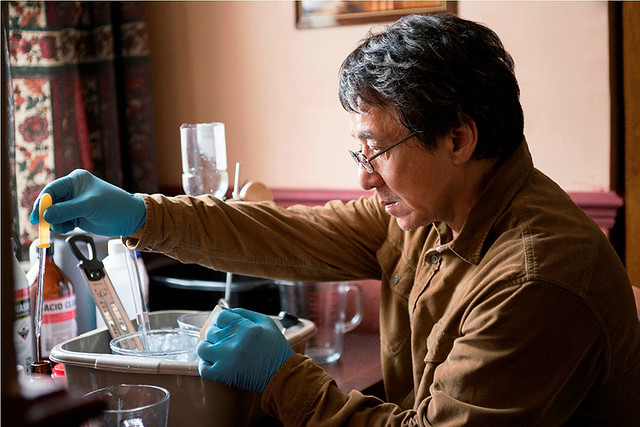 Just based on the trailer, one might notice that the Jackie Chan’s character Quan Ngoc Minh was the Asian version of Liam Neeson’s Bryan Mills (TAKEN), a father with a very particular set of skill. In The Foreigner, however, Quan is no Bryan Mills. A simple quiet businessman in his sixties, Quan is a stubborn man who has lost everything. He doesn’t have the contacts to find out the answers, so he did what any dads would do, searching through news clippings, undergoing long, torturous and tedious waits for the police and government figures to tell him the answer he needs to know.

Jackie Chan acted with a surprising depth. Yet, he did not make me cry in the cinemas. This is the sort of film which will make one grieved at the father’s loss after you stepped out of the cinema and let the events register in your system. The action is tough, real and believable. You don’t see a Jackie Chan in a Hollywood film (audience who are in to watch Jackie Chan might be disappointed), because all I see was a broken old man who is willing to do anything to avenge the death of his daughter. From Quan’s escape from Hennessy’s henchmen in a Belfast bed and breakfast to the brutal fight with Morrison in the woods near the Hennessy’s farm, as well as Quan’s battle with the bombers, I see an ex soldier, not Jackie Chan, whose grief transformed from a slow boil into quiet fury by his sudden loss. The flashbacks to his past were also well cut, allowing the audience to understand his plight without trying to digress too much.

A special mention goes to Katie Leung as Fan (Quan’s daughter), the Harry Potter-actress had a small but impressive appearance as a teenage girl who was at her prime of life, having a boyfriend and getting ready for prom. 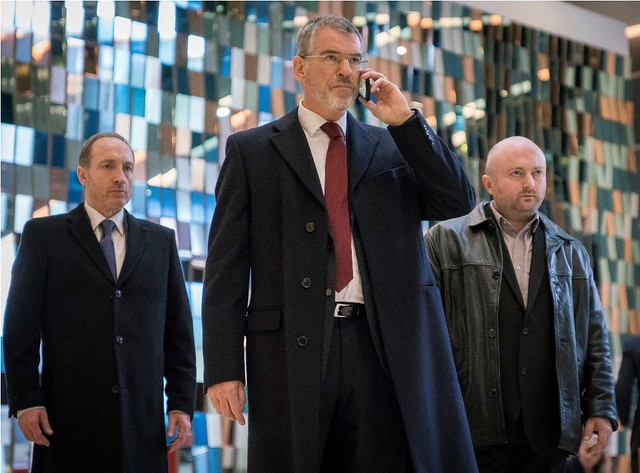 There’s a weird sense of pleasure watching the ex-James Bond actor turn into a minister with an ambiguous agenda. Liam Hennessy (Pierce Brosnan) playing political cat-and-mouse with Quan, and getting increasingly frustrated with his threats kept us on the edge of the seats.

Of course, the movie has its flaws. Apart from the few main characters, the others were forgettable and unmemorable. It might be the cross-race effect, (or it might just be the problem with the editing) – the jump cuts from scene to scene got me muddled with the subplots at times, mixing up the government characters with the Irish bombers. One particular actress whose performance suffered due to the cuts is Charlotte “Charlie” Murphy. She had as many scenes than Hennessy’s wife, Mary (Orla Brady), yet some of her scenes happen so fast and without context that it was only after the whole film before I realised that the several scenes that I got lost in was all along her!

I was hoping for a showdown between the ex-UDI-turn-minister Hennessy and the ex-military father Quan, but it did not happen. Hennessy absorbed everything (surprisingly), even after Quan forced him to send out the incriminating evidences that will destroy everything he had, and this failed to give us the “omph” that we were looking for at the end the story.

That being said, the performance between Jackie Chan and Pierce Brosnan is still worth the dollars to the cinema, anytime. 🙂

Novelist Stephen Leather shared how the film shifted the novel he wrote 25 years ago (1992), in the early 90s setting to the present days, with the original themes and foundation remain. Screenwriter David Marconi updated the technology used but stay true to the story and characters he wrote. 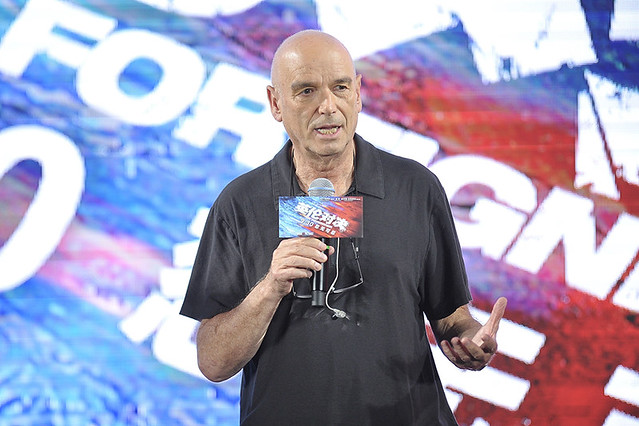 Based on the book “The Chinaman” by Stephen Leather, this is the first movie directed by Martin Campbell in six years. His previous film was Green Lantern (2011). 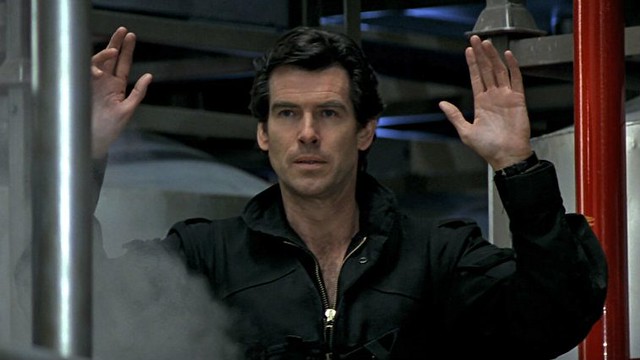 The film marks the first time Pierce Brosnan stars in a film directed by Martin Campbell since the 1995 film GoldenEye. 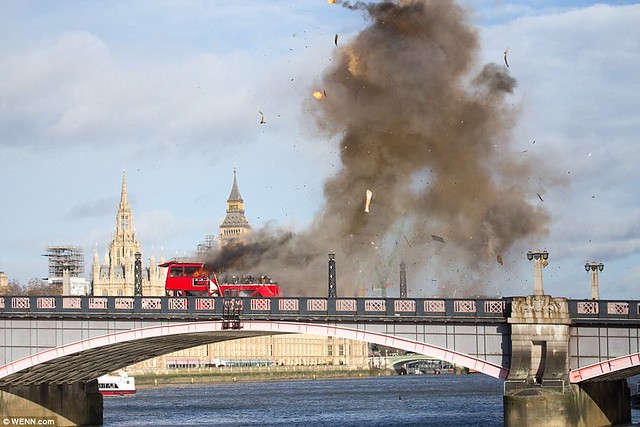 The bomb scenes in London were done with permission from the authorities. The Knightsbridge bank bomb in the opening scene was shot within a day on a weekend. Besides having to get more than 300 extras, the production team had to build the facades within 2 days and require 12 weeks of advance prep, which include getting the approval from every owner on both sides of the street before the local authority would allow them to do the explosion. The Lambeth Bridge bus explosion was done in one take with 12 cameras. It was done with the assistance of London’s Transport authority and the Metropolitan Police Service. 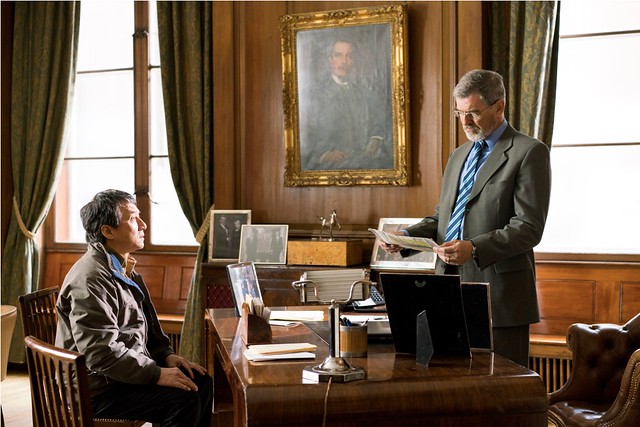 Pierce Brosnan was initially hesitant to take on the role as him being an Irish, had to play ex-UDI + Irish. Jackie Chan shared how he helped him with his British English on set and was patient with his NGs due to his language. For a scene which features Quan continually asking for the names of the bombers over the phone with Hennessy, Pierce Brosnan had no scenes that day and he turn up specially just to help Jackie Chan with his dialogue. In order to spark the desired response from Jackie Chan, Pierce used very strong language to provoke him.

In the trailer, Hennessy’s wife, Mary (Orla Brady) questioned Liam Hennessy (Pierce Brosnan) with “Do You?” after Hennessy tells her someone is asking him for the murderer of his daughter, did not appear in the film. (And I was waiting for that damn moment -.-)