Peps and I are currently in the midst of doing our BTO (Build-To-Order) and suddenly, all the interior designs and household gadgets started becoming so relevant. While it will take us several more years to get the keys to our flat, one of the ideas we have was to do away with television, after all, who watches TV nowadays! 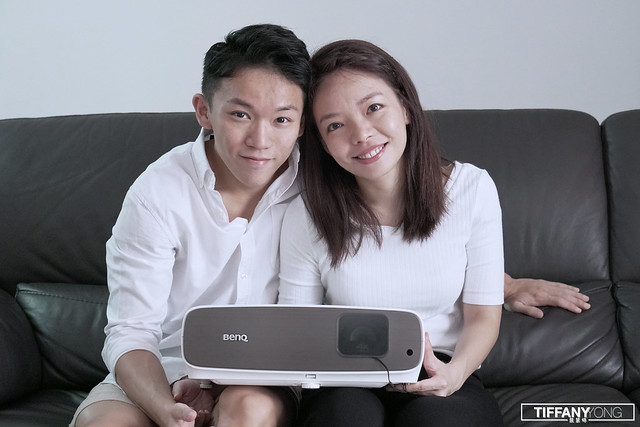 We thought of having a projector instead, and it seems like the law of attraction is doing its work when we were approached by BenQ to review their new BenQ W2700 4K HDR CinePrime Projector! It was a great opportunity for us to try out and see if having a projector will truly fit our needs when the house comes in.

So after trying out the projector, this was what we think:

1. Setup was easy, foolproof, didn’t need to refer to manual

Our first impression of this projector, was that it was so easy to setup. We were projecting from our laptop, and the moment the HDMI cable was plugged in, it synced by itself and matched our laptop screen. With no need to toggle through my screen settings or mirroring the display, I didn’t even need to open the user menu and it was already set for us to play a movie.

2. Several options of setup: Auto-tilt detection and auto-perspective adjustment was on point and user friendly

via GIPHY
Peps Goh: This was something that really impressed me. The BenQ W2700 has a really idiot-proof auto-tilt system that automatically detects it’s position, be it if it’s placed on the ground/ table or on a ceiling mount, and readjusts it’s projection perspective accordingly. No more confused twist on dials to get the image squared out proper.

Peps Goh: We were worried initially as we did not have a speaker to plug it into. But when we turned it on, it turns out that the W2700 has an in-build speaker, and it was pretty solid in and of itself! Which is an added plus if you are looking to bring it to parties, without having to lug speakers along as well. 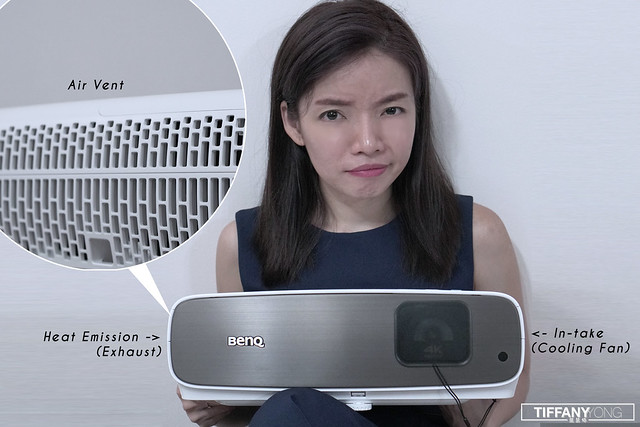 Tiffany Yong: I balanced the projector on my legs during the test. It heated up 5 to 10 minutes into the video-playing. However, there is a built- fan which gave off a soft low humming sound and cool air to cool down the projector.

The No.1 Market Share 4K Projector Brand in APAC 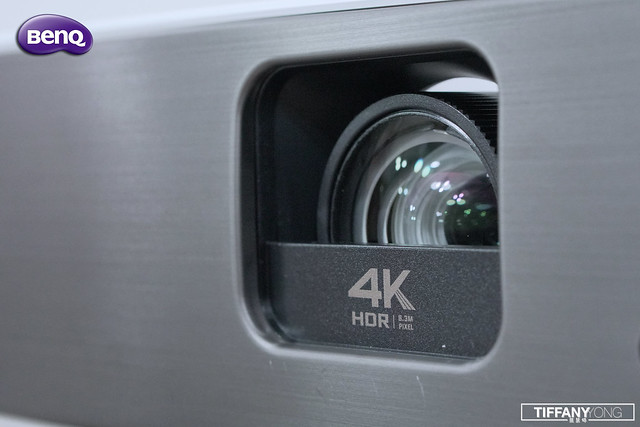 If you are an existing BenQ user, you can replace 1080p projector directly without changing furniture or setting (easy update). But first, what does short throw mean? Quite simply put, it’s a projector that is capable of casting a large image in a tight space, which is ideal for home uses, especially considering how most of us do not have a living room the size of a lecture hall.

And due to it’s similar projecting ratio, user of the previous 1080p (Full HD) models can easily upgrade to this model without adjusting their mounts and screen and simply swap the new one in. 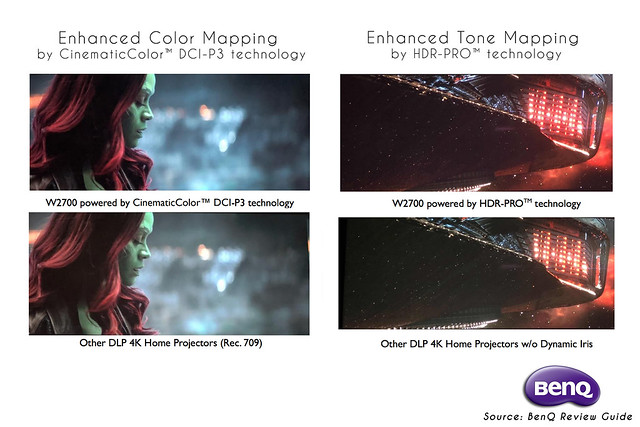 The brand boasts of the true 4K HDR with CinematicColor technology which will attract the audio-video enthusiasts. The technology utilizes optimal colours to bring out accurate and enhanced images in the 4K HDR Home Cinema. The super-wide DCI-P3 colour space (covering far greater visible spectrum than Rec. 709), high netive ANSI contrast ratio and ISFccc certified calibration ensure film-like texture, image performance, sharp and crisp visuals and playback will make one feel like they are in an authentic digital home cinema.

Things You Should Note Before Buying BenQ W2700:

State purchase pack – Does Not Come with HDMI Cable

The purchase pack comes with the BenQ W2700 projector, a remote controller with a pair of batteries, power cable, a user manual CD (which we didn’t use at all as our laptops don’t have any disc reader), a Quick Start Guide booklet as well as an Individual Calibration Report. 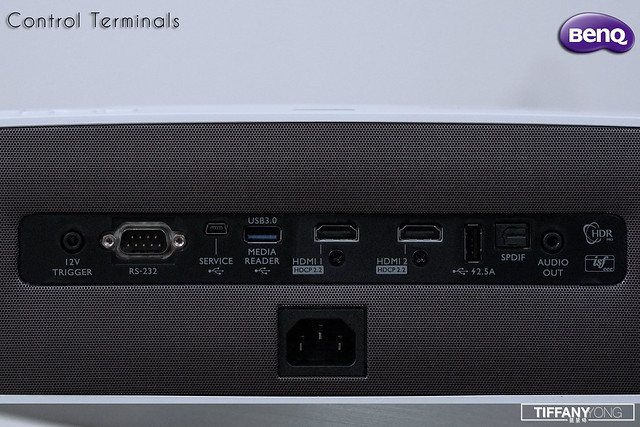 It does not come with any HDMI cable nor WiFi Wireless HDMI connector, so remember to get that before wiring up or installing your projector! Here’s a screenshot we took from the user-manual for your reference on what can be used to connect your BenQ W2700 projector! 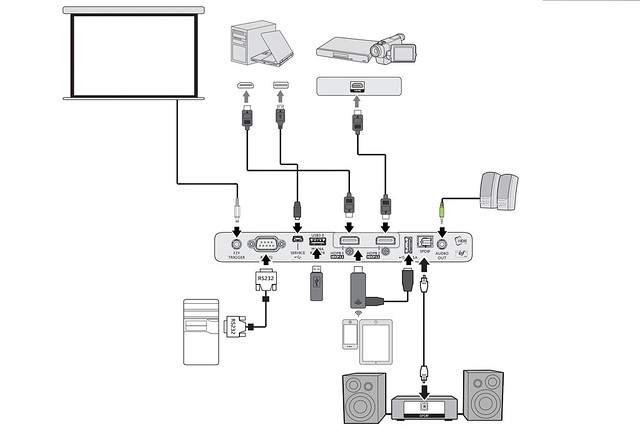 We had a hard time sliding the remote control battery cover off to insert the batteries. Luckily, the projector was possible to navigate without the remote. It will probably come in handy if you are placing the projector near the ceiling!

The BenQ W2700 weighs 4.2kg, while the average 4K projector weighs in at 10 – 15kgs. And so while it may not be the most portable projector to carry around to chalet parties as compared to the AAXA P7 Mini Projector or the Anker Nebula Capsule which both weigh under a kilogram, both of those are limited to 1080p resolutions. And so if you are looking for a movie night with a solid cinematic experience, this may be a good pick for you.

To Buy Or Not To Buy: Is it Worth the Moolah?

Peps Goh: Alright let’s get down to the big question. Should you buy it? Well, if it’s quality versus price, the W2700 is definitely going to give you a solid bang for the buck.

It’s a low price for a 4k projector of this quality when compared to the industry standard, but if all you need is a regular full HD projector, then the price point is not the lowest you can find out there.

So the next question you gotta ask yourself is, what are your looking for? If you already own a projector and are looking to replace/upgrade, chances are, it already is a 1080 HD projector. In which case, I’d say it seems silly to replace it with yet another HD projector. In this case, this 4k W2700 is a good choice to go for.

But if you are looking for your very first projector and simply don’t need such a high quality, or actually looking to have something very portable to bring around on your school/company chalet events, there are other choices out there with a lower price point (and lighter weight) that can fit in a laptop sling-bag. 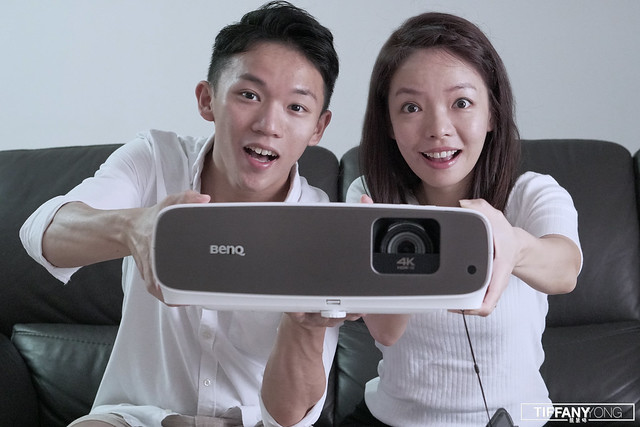 For Tiffany and I, we are looking to have the projector replace the need to have a TV in our coming BTO home, hence this is a solid choice. It’s another handful of months to year 2020, and for us, we feel that it’s kinda late to use just a 1080HD anymore.

Fun fact: TV channels in Japan have already been streaming TV shows on 8k resolution. When I first read that I thought it was hella cray cray. Anyways, my point being, 4k is not long from becoming the average level of projection standard, hence I’d say it’s a great choice for us!

Disclaimer: Please be rest assured that even though the products were sponsored, it does not have any bearing on the content of this post. Opinions stated are genuine and honest. Also note that all sources, information, content, links are valid to change at any time.