Marvel Studios’ Black Panther follows T’Challa who, after the death of his father, the King of Wakanda, returns home to the isolated, technologically advanced African nation to succeed to the throne and take his rightful place as king.

But when a powerful old enemy reappears, T’Challa’s mettle as king -and Black Panther- is tested when he is drawn into a formidable conflict that puts the fate of Wakanda and the entire world at risk. Faced with treachery and danger, the young king must rally his allies and release the full power of Black Panther to defeat his foes and secure the safety of his people and their way of life.

Tiffany Yong: When Black Panther first appeared in Captain America: Civil War, I was pretty impressed with the agility and powers of the black superhero. The Epiphany Duplet waited for the new film in anticipation, wondering if it will be as comedic and entertaining as Thor: Ragnarok or serious like Captain America. And what we got is a movie with a great antagonist (Michael B. Jordan) with a clear motivation albeit slightly extreme, as well as a new king who has to juggle several responsibilities at one go.

Peps Goh: The story was surprisingly well crafted. From the pacing to the strategically placed foreshadowing. And apart from T’Challa himself who has a solid character development arc flowing through the whole movie, his antagonist, his companions and his foes all go through a believable character journey before arriving at their respective climatic moments. 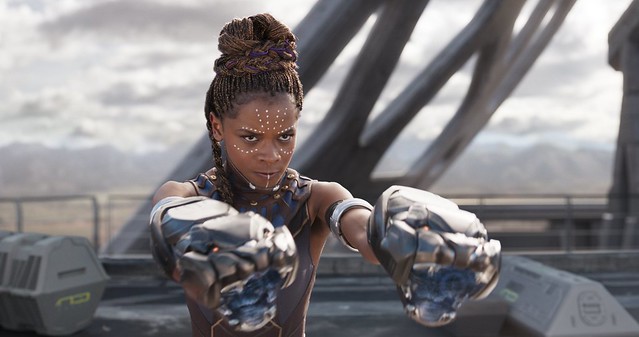 Tiffany Yong: Shuri (Letitia Wright) was surprisingly the most outstanding character in the movie. It’s not uncommon in films nowadays to have female playing the IT geek roles, but Letitia Wright put passion and fun into her character, making her more charming than Lupita Nyong’o’s Nakia. I love the jaw-dropping production set design by Hannah Beachler and the gorgeous costume designs by Ruth E. Carter. I’m so glad they did not try to do the typical desert set or earthy-coloured rags.

Peps Goh: The action on the other hand had greatly disappointed me. This is likely not going to be a popular opinion, what with the well placed and constructed explosive crowd pleasing moments as seen in the trailers too that no doubt would have impressed everyone. There were good moments, for example, the clash between the male and female warriors in the plains including the war rhinos were the most creatively choreographed action I think, there were some really good ideas executed beautifully in there. 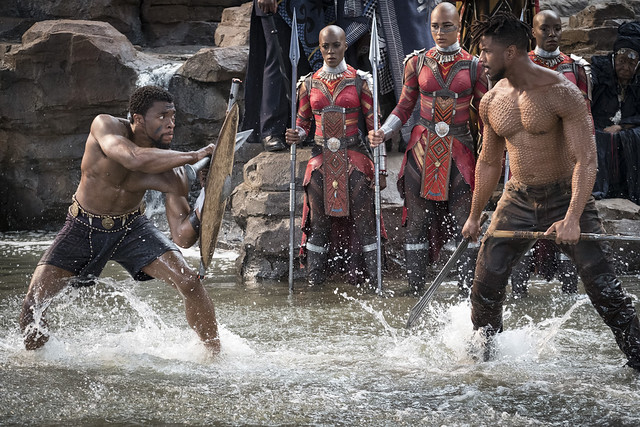 Peps Goh: Those moments are indeed amazingly done. But what i am disappointed by are the stylistic choices of the smaller scale choreographies. For instance, the ritual fights were in my opinion a massive missed opportunity. I’ve read that they had taken inspiration from African martial arts, and i know nothing of African martial arts, so I can’t accurately critic on how executed were those styles translated into the choreography. But my oh my was the sequences as stale as a 3 day old bread.

First, they had interesting weapons to work with. The application however didn’t take advantage of that.

Second, when both sides had been disarmed, that was another great opportunity to showcase both side’s unique hand to hand styles. See, when the black panther was stripped of his superhuman abilities, it wasn’t a handicap, it was much the opposite. It levelled the playing field and in turn gave the choreographer the opportunity to show off a glimpse of the 180 different martial arts that the Black Panther supposedly had in his arsenal (that figure-4 leg choke he used at the end was great, why was it the only interesting thing he did?) He could even have sprinkled in some claw combat styles with just his bare fingers to hint at the sized down version of his unique panther style of combat when without the enhanced destructive abilities bestowed by the anti-matter claws of his Vibranium suit. Hung-gar’s tiger style grappling perhaps? The possibilities are endless, yet not one explored.

Third, the setting of that fight was on the beautiful edge of a waterfall death drop, standing shin deep in waters. All that could have been used to increase the stakes of the fight, strategically positioning yourself to push the opponent towards the edge, or to have your back to the sun so it would obscure the foe’s vision. Using the water to distract, trip, or to pin the other under etc. all unexplored apart from the end of both ritual fights that both involves ending it with the death drop in one way or the other. 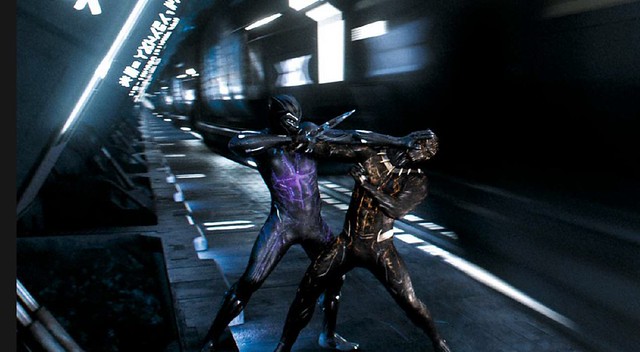 Peps Goh: All that was just discussing the ritual fights. The final 1 v 1 was disappointing in more ways than i can cover in this post, so i may just talk about it in a future article titled: “Most disappointing fights” for now let’s just day it also repeats a lot of the previously mentioned missed opportunities.

Tiffany Yong: The most fanciful stunt was the finale takedown move with the use of the dagger, and that was all.

It is rare to see a blockbuster film exposing the harsh truth and history of the real world – slavery, poverty and colonisation, so I definitely have to give the film some credit for that. It would have been a great film if we weren’t rating this under the action/superhero category. Luckily, the box office being a hit and the positive critics mean that we will definitely get to see more of the Black hero! While the audience might find the story refreshing the first time, it would take much more to impress the fickle-minded the next time round. Looking forward to see a more diversified action styles from Black Panther in future!

The fighting in this film is based on African martial arts. The filmmakers also cited the action scenes in Creed: The Rocky Legacy (2015) and the “Kingsman” films as an influence on the style. 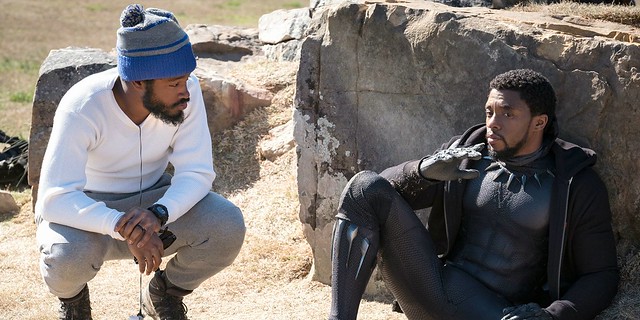 Director Ryan Coogler brought in consultants who are experts on African history and politics to work on defining Wakanda: “There are many African countries, each with different histories, mythologies, and cultures; there are several tribes who live amongst each other, and together they make the identity of their country. We honed in on some of the history/cultural influences from African countries and then made estimations.” The name “Wakanda” comes from the Wakamba tribe of Kenya, also known as the Kamba. It was mentioned as a location on a S.H.I.E.L.D. monitor in Iron Man 2 (2010). The location pinpoints the country as being situated at Lake Turkana, on the borders of Kenya and Ethopia. The region in real life is special for holding great mineral deposits (properties similar to Wakanda). It is visually based on the waterfall locations the Iguazu Falls (Argentina, South America) and the Victoria Falls (in Zambia and Zimbabwe). 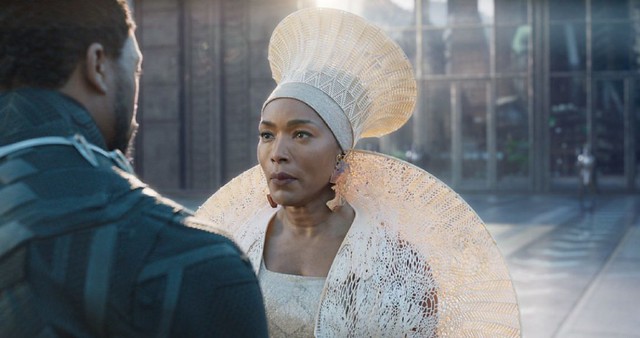 For her role as Queen Ramonda, Angela Bassett underwent training with Corey Calliet on a special regime. Calliet created high-intensity interval training circuits for Bassett focused on her lower body, as “the fastest and the most effective way to burn fat”: mountain climbers, jump squats, lunges, push-ups and high knees, in intervals of 30 seconds on, 30 seconds off, up to an hour at a time. 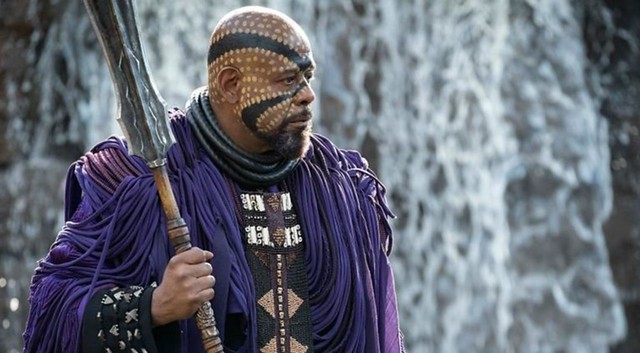 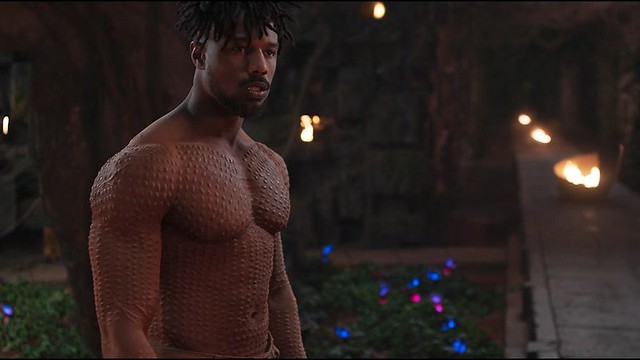 Michael B. Jordan initially auditioned for the role of Sam Wilson/The Falcon back in 2013 before being cast in this film three years later. Killmonger’s bumpy, ritualistic tribal markings on his chest and torso are based on the scar tattoos of the Mursi and Surma tribes.

John Kani and his son Atandwa Kani play T’Chaka in his old age and youth. 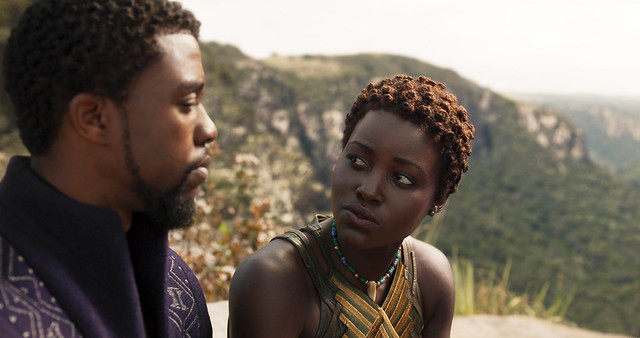 In the comics, T’Challa is a noted scientist/inventor and skeptic on the supernatural; in contrast, his sister Princess Shuri visits the Djalia, a spiritual dimension of Wakanda created from the memories of Wakandan citizens. In the film it is the opposite: Shuri was made an inventor to provide a good role model to young black girls, and T’Challa visits the Djalia to communicate with his dead father.

There are two post credit scenes. The first shows T’Challa making a speech at the United Nations, telling the world that Wakanda will now intend to share their knowledge and power. The second shows Bucky awake and well, living in the outskirts of Wakanda. Shuri asks after his health, before telling him that he has much to learn.