Enid Blyon’s “Mr Galliano’s Circus” series was one of my favourite childhood series. I got to lived it through Hugh Jackman’s “The Greatest Showman” last year, and the closest I’ve experienced live it was through the Cirque Adrenaline in 2016. Never did I think I could experience it firsthand through the Great Moscow Circus in a REAL CIRCUS TENT this year. 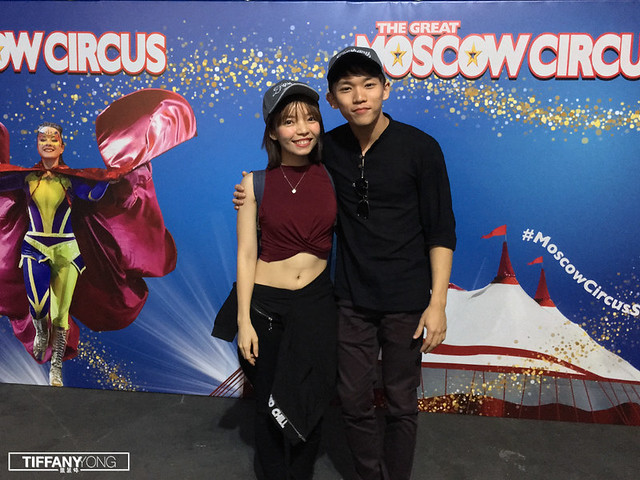 THE GREAT MOSCOW CIRCUS, returns to Singapore for the first time in over 10 years, with over 45 performers – acrobats, clowns, jugglers – all circus stars renowned world-wide for their theatrical flair. With such breathtaking talents, how can I not bring my little dare-devil acrobatic boyfriend along?

It was pretty incredible when we first stepped into the million-dollar Big Top which create a traditional European atmosphere where we as the audience experience the whole show. We got the seats from section B, which was on the left side of most performances, while the performances were mostly 360 degrees, section D is the spot you should go for if you want the most engaging and best view of the thrilling program. 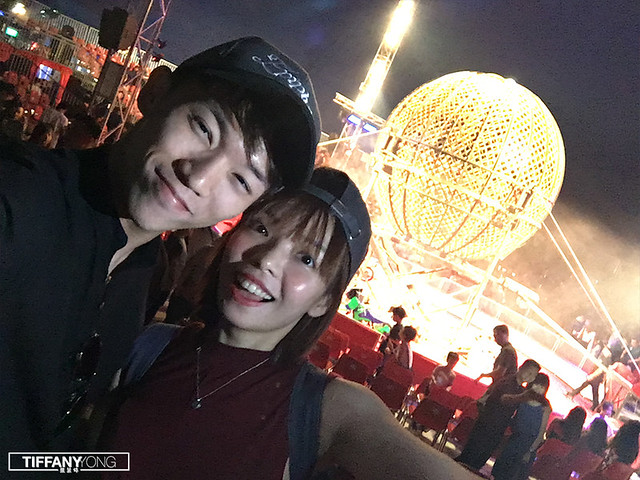 With more than 100 tonnes of equipment, the Great Moscow Circus Singapore consist of many dangerous and death-defying acts, including the Wheel of Death and the Motorbike Sphere of Fear. Most importantly, there are no animal acts, so for animal lovers out there, this fun-filled entertainment show is definitely suitable for all ages.

If you’ve watched the sneak peek video above, you’d have a general idea of how the show looks like from our angle. So we have hand-picked the top 4 “MOST” performances out of the 16 shows to highlight!

Hilariously funny, Shindrov and his assistant Bella is always a joy to laugh with. 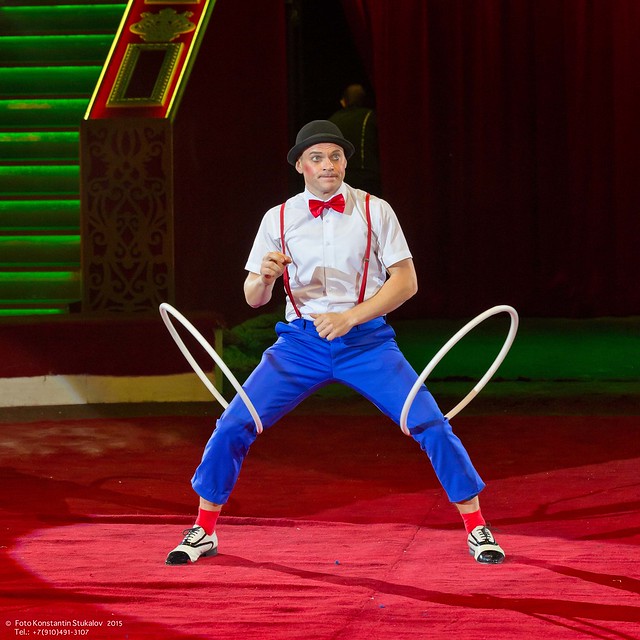 The Epiphany Duplet are often impressed by how the russian clowns were able to make thousands of audience laugh without much words. They were entertaining and acted as great intermission fillers while the equipments were dismantled and set up.

I loved Zac Efron and Zendaya’s “Rewrite The Stars”, and watching the trapeze artists dance felt as if I was watching them life. 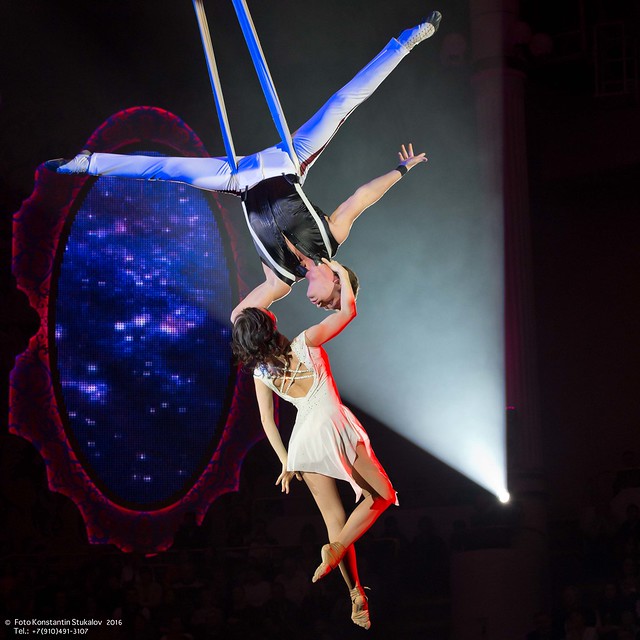 There were no safety wires for the aerial stunts and I was entranced by the beauty of their movement. The amazing Quick Change Transformation (see the video) was equally beautiful.

Or perhaps not. My eyes “popped” only at the initial stage, and then “eww” for the rest of the time. 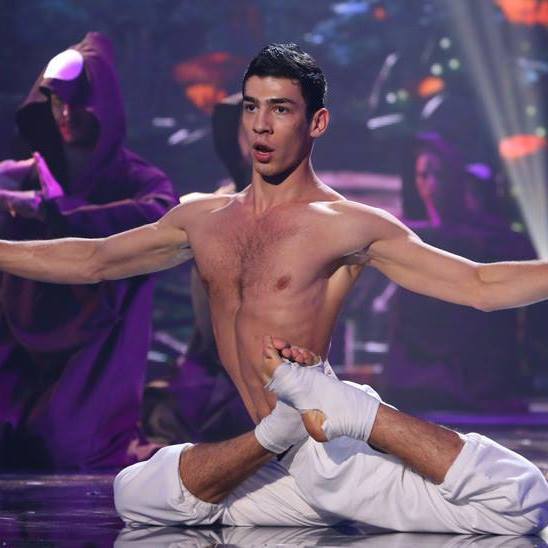 The contortionist was shocking. I squirmed in my seat as he twisted himself like a rubber. Kids seem to have a different sense of humour as they laughed at every single move he made. It felt painfully entertaining.

The Wheel of Death is not unique to the Great Moscow Circus as we’ve watched it before in the Cirque Adrenaline. 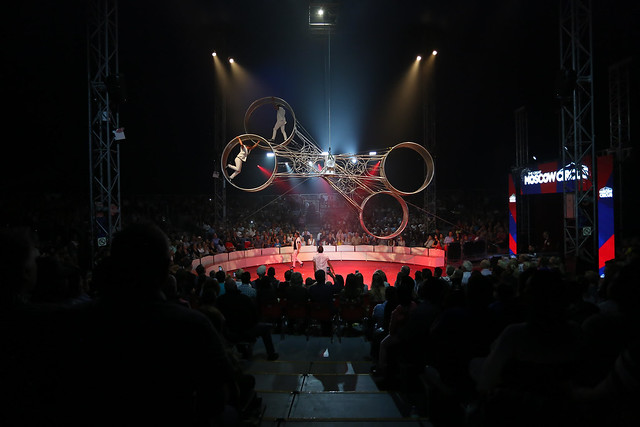 However, the whole experience felt somewhat more intimate, perhaps because of the location. Our hearts went to the daring and fearless acrobats especially when they skipped on ropes and went blind folded on top of the wheel. I was glad there was no “death” on the wheel.

THE GREAT MOSCOW CIRCUS is held in a brand new red and white Big Top Tent, beside Marina Bay Sands from 25
October 2018 for 4 weeks only.

The Great Moscow Circus is presented in the red-and-white tent on Bayfront Avenue next to Marina Bay Sands Exhibition Hall. It is fully air-conditioned and seats are elevated, and tiered, for patron comfort. 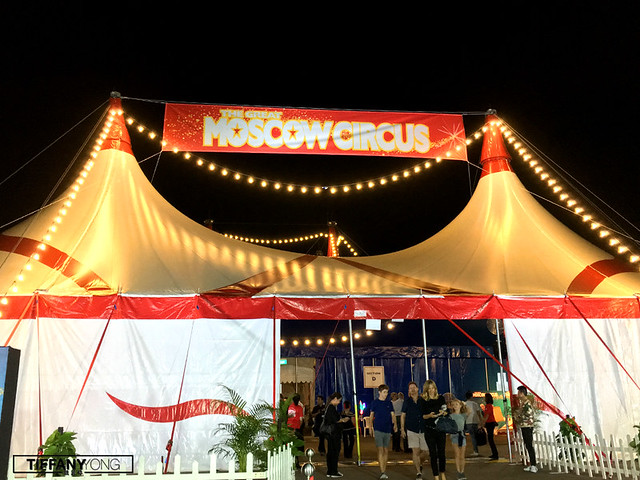 Taxi: Please have the taxi drop you off at Marina Bay Sands Exhibition Hall taxi stand. From there, then proceed northeast on Bayfront Avenue (Away from the hotel/exhibition centre) to Bayfront Link. You will see the red-and-white tent straight ahead. Make a right on Bayfront Link and proceed to the entrance on the Marina Bay Promenade.

MRT: From either the Circle Line or Downtown Line, alight at Bayfront Station and proceed to exit E. Follow the signs to Level 1, Bayfront Avenue, and make a right. You will see the red-and-white tent straight ahead. Make a right on Bayfront Link and proceed to the entrance on the Marina Bay Promenade.

1) The ‘traditional’ large tents, commonly known as ‘Big Tops’ were introduced in the mid-19th century. The Great Moscow circus million-dollar tent was specially created for the Singapore season by leading Italian tent manufacturers Anceschi and Canobbio and took several months to build.

2) This brand new Big Top stands at about 17 metres high and is 40 metres in diameter. It is supported by 4 steel masts, known as King Poles, that each stand at 18.5 metres high. It can accommodate 1,600 people per show in all chair seating. The ring is 10 meters in diameter and no audience member will ever be more than 11 meters from the action.

3) The raising requires a team of approximately 20 people to raise the 4 King Poles and the more than 130 side poles and 250 tent pegs to secure the structure.

Facebook | Instagram | Twitter | YouTube
*Disclosure: Event invitation from Theatre Tours International and Sliding Doors Entertainment. No monetary compensation was received for the review. Please be rest assured that even though the performance were sponsored, it does not have any bearing on the content of this post. Opinions stated are genuine and honest. Also note that all sources, information, content, links are valid to change at any time.