War For The Planet Of The Apes Movie Review | by tiffanyyong.com

War For The Planet Of The Apes Movie Synopsis

In War for the Planet of the Apes, the third chapter of the critically acclaimed blockbuster franchise, Caesar and his apes are forced into a deadly conflict with an army of humans led by a ruthless Colonel. After the apes suffer unimaginable losses, Caesar wrestles with his darker instincts and begins his own mythic quest to avenge his kind. As the journey finally brings them face to face, Caesar and the Colonel are pitted against each other in an epic battle that will determine the fate of both their species and the future of the planet.

War For The Planet Of The Apes Movie Review:

I’m not exactly a fan of apes. When the first reboot came out in 2011, followed by the second instalment in 2014, I naturally skipped them, ignoring the positive reviews. Well, this was going to continue for the third, until Twentieth Century Fox sent an invitation to catch the preview. I went half-hearted, partially because Peps was held up with his theatre rehearsals and couldn’t make it for the movie. Without any prior knowledge of the past two films, I enter the theatre thinking it was going to be another Kong: Skull Island.

Well well, War for the Planet of the Apes was much more than just that. I was impressed, I didn’t have trouble picking up the story even when I’m watching with fresh eyes. It felt amazing how the CGI apes were able to communicate with the audience (not just one another!) through their intrinsic expression and body language. The themes were clear and yet so contradictory. When the decision between survival versus morality, human versus ape, good versus evil come into play, the war was not just between the 2 species, but also within themselves.

Watching drunkard Haymitch from The Hunger Games and Merritt, one of the horsemen from Now You See Me turn into an iron-fisted and somewhat psychotic Colonel was unsettling. He did his job well, that “I-Did-For-The-Greater-Good” justification made his motive so understandable that I could see myself rooting for this heroic antagonist if the tables had been turned. However, when it comes to Gabriel Chavarria’s role as Preacher, the soldier (on the right) serving the Colonel, I was a tad disappointed. He had so much screen time and potential to be the only human amongst the brainwashed masses who still had some conscience left, but nope, the character let me down. 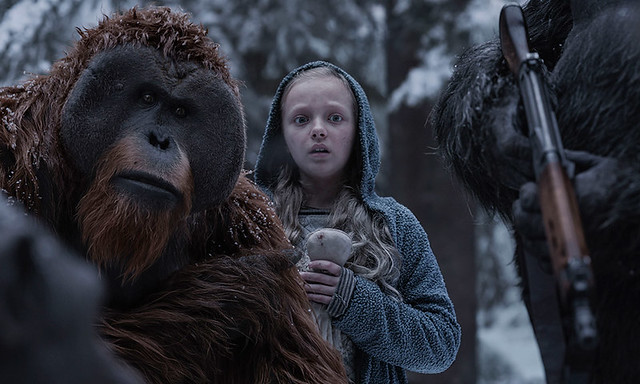 Innocent Nova (Amiah Miller) was astounding in her wordless performance, the only sweet young human left, partly because she was an infectious outcast. Human society seem hopeless, and it wasn’t difficult for me to buy into the idea of wiping the entire population.  Andy Serkis’s Caesar silent interaction with her went from suspicion, hostility to pity, trust and it made her look more like a fallen angel than a mute human. 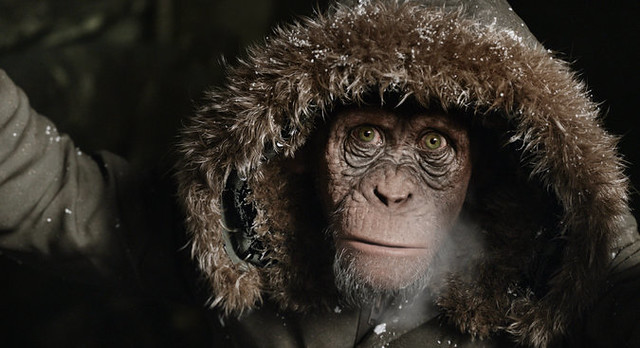 Steve Zahn’s appearance as ‘bad ape’ (Yes, that’s the original Frank Heffley from Diary of a Wimpy Kid) is probably my favourite part of the film. He provided the much needed comic relief to the otherwise grim story line, and there were moments where I nearly want to do a “Awww” to this E.T. like talking-ape.

I was glad that I got to watch the movie, and it pretty much convinced me to catch the first two from the start!

In the first film, Rise of the Planet of the Apes (2011), Caesar could only utter a few words, most notably “No!” In the second film, Dawn of the Planet of the Apes (2014), his vocabulary had greatly increased, able to speak in nearly full sentences with syntax and grammar, but still with a rough tone and cadence to his voice. In this film, he is able to speak nearly identical to what a human can produce, indicating his growth into personhood. 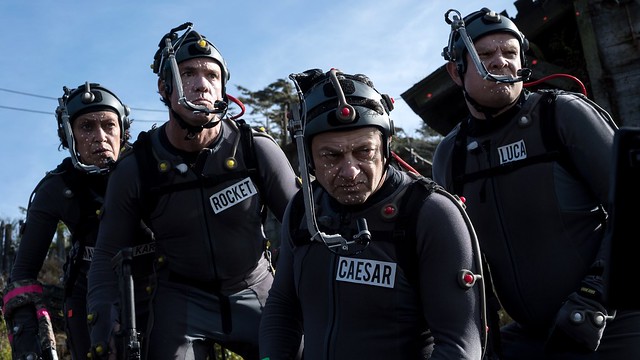 Andy Serkis, Terry Notary, and Karin Konoval are the only actors to be in all three of this Planet of the Apes trilogy. Serkis plays Caesar, the chimp leader of the apes; Notary plays Rocket, a chimp who is one of Caesar’s most trusted followers; and Konoval plays Maurice, an orangutan that is another of Caesar’s most faithful followers. Ape actors Andy Serkis (Caesar) and Terry Notary (Rocket) have also both played King Kong: Serkis in Peter Jackson’s King Kong (2005) and Notary in Kong: Skull Island (2017).

According to director Matt Reeves, the apes that serve the humans are called “Donkeys”, both as a reference to Donkey Kong and like donkeys, they are used as pack animals.

Andy Serkis, the voice of Caesar the ape leader, India has strongly influences on the film. The actor says that the character of Caesar was inspired by the leader of the Indian independence movement, Mahatma Gandhi.