Following the showdown on Tsing Ma Bridge, He-Ying (Donnie Yen) and Sao are missing after falling into the sea. The struggle soon becomes the talk of the town, even May is followed by paparazzi. She hides in her friend’s home to avoid being interviewed while searching for He Ying.
After finding him, Yuanlong (Simon Yam) and Niehu head to Beijing with He Ying to search for the Golden Wheel of Time. As Yuanlong tells his life after being defrosted 18 years earlier, and how he has been searching for them. He Ying believes every word he says, not knowing that he is slowly being led to a trap…

Tiffany Yong: I didn’t have very good impression of this series when the first film – Iceman 3D  came out in 2014. The story was interesting, but the plot was lousy. I didn’t like Eva Huang’s performance in it. When the sequel popped out 4 years later suddenly (we knew about it when Shaw sent us the invitation), Peps wanted to watch as we’re fans of Donnie Yen and he enjoyed the action back then. I was pretty speechless about this film, and begged Peps to contribute his opinions. This could potentially put his career at risk, but we believed that the audience are not blind, hence the honest opinions. 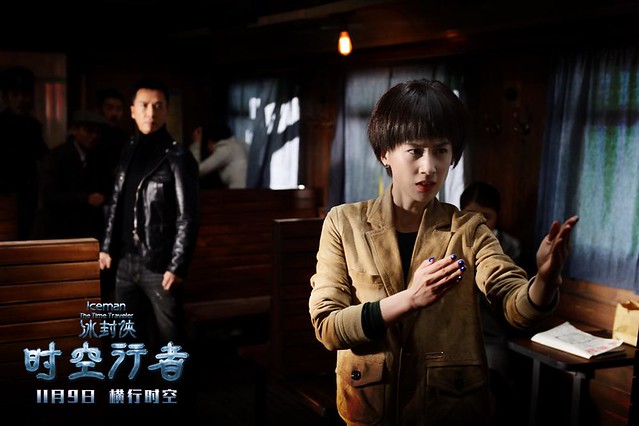 Peps Goh: Alright, I think we need to take a moment and have a serious conversation about this film. Somewhere along the line, somebody had clearly dropped the ball on this project.

Movies are the precious babies of the productions whom give birth to them through months of hard-work and concerted effort. Sure sometimes something goes wrong, and some babies gets dropped at birth. But this baby had clearly been thrown at the wall, full force, and then doused in gasoline and then set on fire.

Remember that time in 2015 SEA Games, diving? That 2 Filipino brothers who knew they didn’t have a chance, they proceeded to botch their dives as spectacularly funnily as they could? Yeah, this movie is like that dive, except on a million dollar level. It wasn’t normal level fxxked up, it was high level fxxked up, like they actually wanted to make it terrible.

It made me wonder, were they contractually obligated to make this film but really didn’t want to? (The film was shot in 2014, and only released now) Because if you watched the film, you may wonder; were the entire team constipated the whole time? Because if they gave any less shit about the coherency of the film, they would have a serious medical condition.

Okay enough jibbing. I’ll give credit where credit is due. The action scenes were enjoyable and really fun to watch. Good choreography and wire-work all around. And shout-out to the wardrobe, it looked like the art department and wardrobe put real effort into the costumes and props. That’s basically all the compliments I have about Iceman 2. 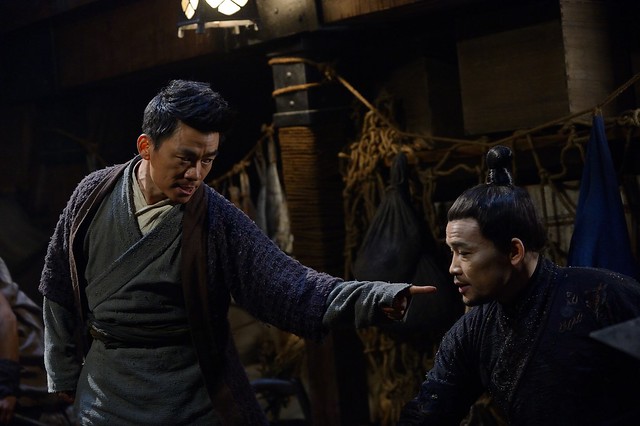 Peps Goh: Now, lets bash it. The script seemed like a first draft nobody bothered to finish, and they gave it to a 6-year-old to fill up the missing bits.

The camerawork looked at times as if it were manned by a person having a mild stroke at the time, but didn’t put the camera down until they shouted, “CUT”.

The drone footage were grainy and so poorly shot it’s unbelievable. (I know a guy called Bryan who would easily do it way better, HMU I’ll introduce y’all)

The green screen SFX artist probably only had one eye-ball, because the depth perception and perspective was off the whack. He/she had also not bothered to layer a decent shadow and ambient blending.

And the export seemed to be an unfinished draft they released too early. At one point it cut to black… and then back into the same scene like someone accidentally deleted a bunch of frames and didn’t notice. On another occasion, when the scene kicked into a music video vibe with a song overlay into a series of establishing shots…. but then cut to black. With the audio cut off abruptly too, without bothering with a L-cut or even to fade the music out gradually. What the actual fxxk.

And I’m not done with the script. The story oh the story… The writing is so lazy! It’s genuinely upsetting how dumb they must think the audiences are. With lazy expositions to establish away the plot and explain the twists, and out-of-character dialogues to move the plot along, it really makes one wonder what happened during the writing. A bunch of the dialogues didn’t even make any sense, like they needed those words to be uttered for the sake of cutting it into a cool trailer. Did they start shooting the movie with only 2 pages of the script and then tried to figure things out along the way? Or did the investors try to interfere with the writing halfway into the filming and they decided to save it in post with voice-overs and pick up shots?

I’ve watched a fair bit of slap-stick comedies. Some of them were pretty bad, perhaps it was just my bad sense of humour. But for Iceman 2, the funniest part was how they were not trying to be funny. It seemed that there were 3 script-writers and directors on set, one trying to make it romantic, one trying to do the action, one doing the funny cross-overs, and all of them did the whole shoot without communicating with one another. 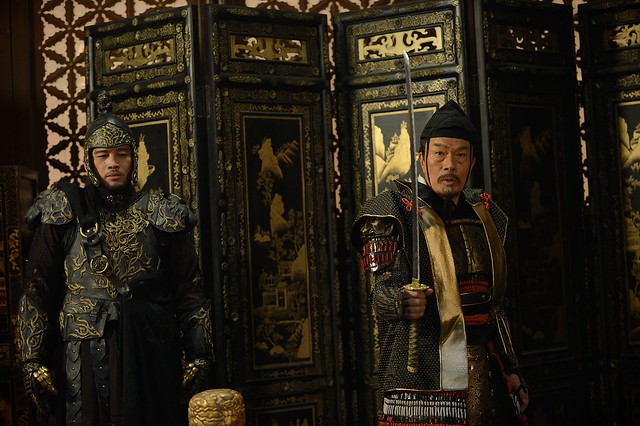 Peps Goh: They really stopped trying towards the end. Did they run out of screen time and decided to do whatever?

“Oh, let’s teleport Donnie Yen into the scene and let him just conveniently lob off Yasuaki Kurata’s head off from the back.
Oh and let’s put him on a horse. Yeah that’s right, teleport him in with a whole mufxxkin’ horse. Never mind where the horse came from, nobody will care. And make the horse white, heck yeah!
Oh and let’s randomly change him from his dynasty armour into his modern leather jacket randomly whenever we please, no one will notice. What is conti even amirite lmfao xoxo.”

Yes, and He Ying – Donnie Yen’s character decided to question his existence near the end suddenly. Like what just happened?

That’s what I imagine happened.

Either way, they had amazingly achieved the unachievable, they had managed to make this sequel suck a mile harder than the first instalment, bravo claps fervently.

My advice; watch this with your friend while y’all are all drunk. Like violently wasted. Like puking out of your nostrils wasted. It’ll be fun. It’ll be a real trip.

Or watch it to see if you agree with us. Quoting a review that Peps read somewhere about another film, this should be audited, not reviewed.

P.S. Here’s the most hilarious part – the production team said during their press conference, that they did the film in hopes to be better than the first. 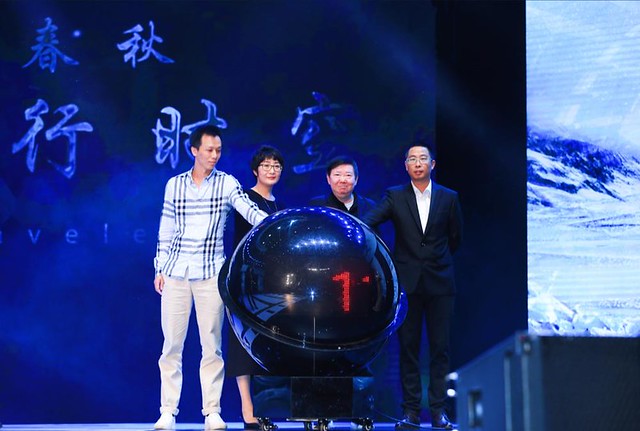 The movie production house (or producer) issued a weibo post on 3 November 2018, complaining about Donnie Yen’s lack of professionalism and interference in the making process of film, in areas such as the script, character appearance, stunt choreography, as well as changing the lines. Scriptwriter cum producer Manfred Wong (文隽) emphasized during the conference that “Iceman: The Time Traveler” has nothing to do with the first film. He had rebuilt the story, changed the narrative angle, inspired by The Matrix (22世纪杀人网络), and re-edited the film many times. He said “I wish to erase the bad impression people had for the first, and spread this film by word of mouth.”

It was later revealed that the false accusations were made by the publicity staff from Qitai Group (启泰文化公司) in hope to generate more news and box office sales. 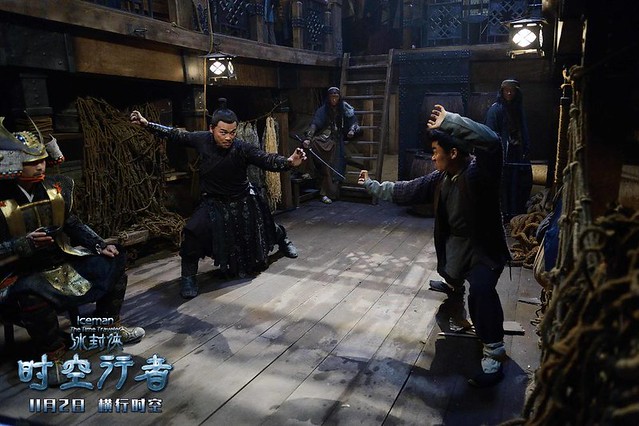 Yu Kang (喻亢) – left – is a member of the Donnie Yen’s stunt team and the action choreographer of many films. The first Iceman 3D (冰封：重生之门) movie was one of his first breakout role with proper memorable character.