May 1980. A Seoul taxi driver named Man-seob (SONG Kang-ho) comes across an offer too good to be true. If he drives a foreign passenger from Seoul down to Gwangju and back again before the curfew, he’ll be paid the unthinkable sum of 100,000 won – enough to cover several months of unpaid rent. Without stopping to ask the details, he picks up the German reporter Peter (Thomas Kretschmann) and sets off along the highway.

Although stopped by police roadblocks at the edge of Gwangju, Man-seob is desperate to earn his taxi fare, and eventually manages to find a way into the city. There they encounter students and ordinary citizens taking part in large-scale demonstrations against the government. Man-seob, alarmed by the danger in the air, pleads with Peter to go quickly back to Seoul. But Peter ignores him, and with the help of a university student Jae-sik (RYU Jun-yeol) and a Gwangju taxi driver named Tae-sul (YOO Hai-jin), begins shooting with his news camera. As time passes the situation grows more and more serious, and Man-seob keeps thinking of his young daughter at home all alone.

I didn’t really know where to start for this review. This is one of those films where I would hope to have as many people watch it as possible. The more I researched on the backstory of A Taxi Driver Korean Movie, the more emotional and touched I felt. Set in 1980, the movie focused on the perspective of a widowed taxi driver Kim Man-seob. Similar to ‘The Wailing‘, the protagonist is an antihero. He is an everyday citizen who is stingy, imperfect and totally relatable. 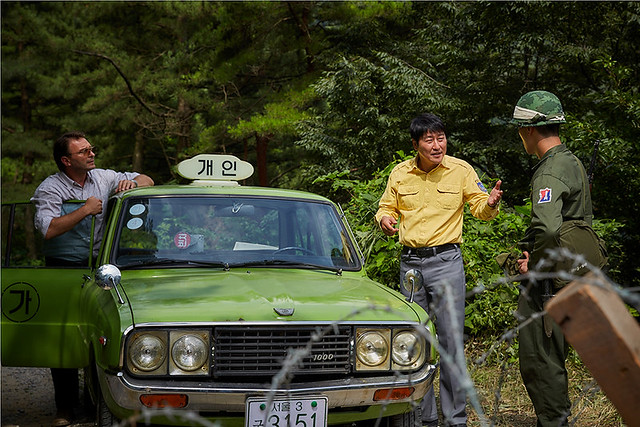 I was surprised how ‘unlikeable’ Kim Man-seob was. I was expecting a heroic protagonist who brings the German reporter through the ‘battlefield’ and back, dramatic and herculean like the characters in The Battleship Island. But in the end, it was a normal man with the same amount of instinctual fear as anyone with the right amount of common sense would have, showing an extraordinary sense of resolve to complete what he commit to. When Song Kang-ho said his line, “I left my passenger behind.”, the emotions evoked was strong and intense.

Baron Von Strucker (Thomas Kretschmann | The Avengers: Age of Ultron) turned into German reporter Jürgen Hinzpeter, wasn’t the champion of justice I thought him to be either. His initial motive to enter Gwangju was more “for the news” than for the people. I enjoyed watching how the reporter had to communicate with the seemingly money minded taxi driver, and slowly developed comradeship during the short span of time. There were plenty of surprises as the audience get to view through Peter’s lenses. The welcoming moments from the student protestors brought tears to my eyes the same way when I was offered a burger by a group of volunteers when I was queuing to pay my last respect to our founding father Mr. Lee Kwan Yew. 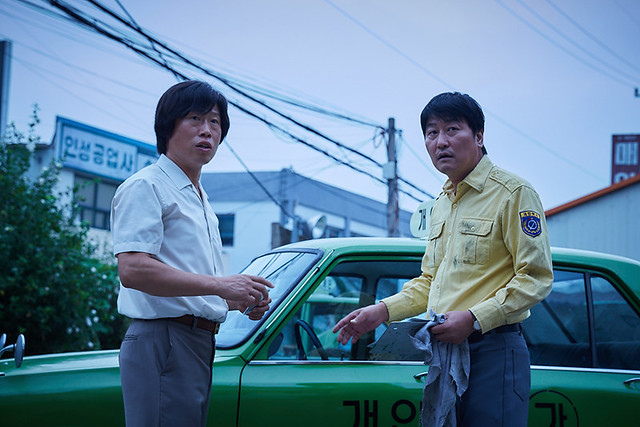 The director brings the audience on a journey to revisit the events of the Gwangju Uprising through the eyes of the award-winning reporter and his driver. It doesn’t try to become a docu-drama, in fact, the inclusion of the little army-taxi-rescue and chase (not sure if it really happened) heightened the tension between the cruel dictator Mr. Chun and the civilians. Besides that, they also managed to include supporting characters and cameos who stole the scene. Yoo Hae-jin’s Taxi Driver Hwang Tae Sol whom provided a roof to stay and a meal for the Seoul visitors, and his subsequent heartbreaking sacrifice.

Amidst the chaos and bloodshed, I am impressed how Director Jang kept a consistent hopeful note throughout the film. The story did not try to preach, but provided a tactful message on how heroes are nurtured during the painful times. Mr Kim might be the main unsung hero of the film, but the story gave the rightful credits to the students and even the soldiers. Ryu Jun-yeol as university student Jae-sik gave audience an insight on what the students represent then. I would love to continue sharing the different moments that touched my heart, but it would spoil the film.

Take some time out to watch this heartwarming film. It is worth every dollar of the ticket, as it renews one’s faith in humanity. You won’t regret it, I promise. 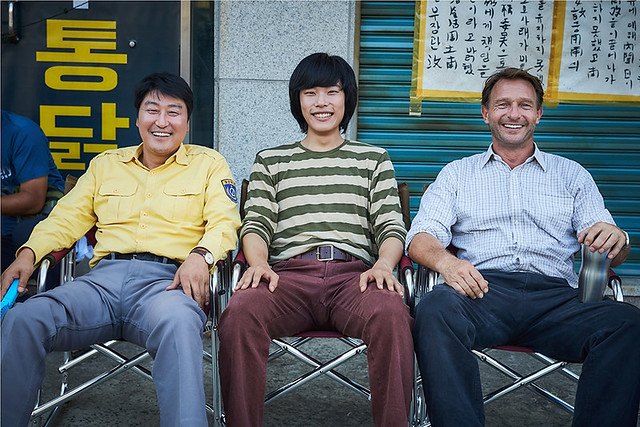 ‘A Taxi Driver Korean Movie’ was released on August 2, 2017 in South Korea. On the same day, the film had its international premiere at the Fantasia International Film Festival in Montreal, where Song Kang-ho was named Best Actor for his role in the film. It has tied with The Admiral: Roaring Currents and The Battleship Island for the record of films which have surpassed four million viewers in the first five days of release.

The film topped the South Korean box office for three consecutive weekends. As of September 9, the film surpassed the 12 million mark, becoming the tenth most-watched local film of all time in South Korea. It is also Song Kang-ho’s third film to have sold more than 10 million tickets. 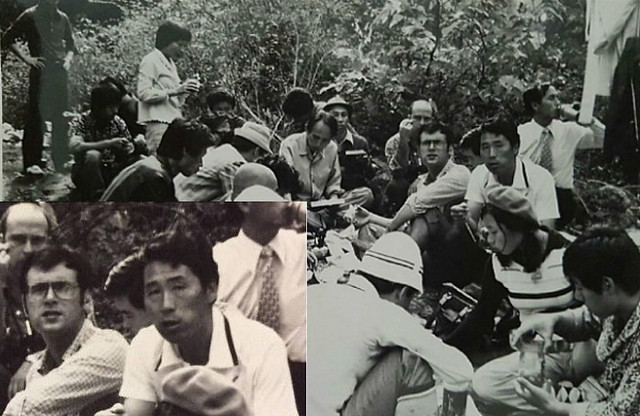 The written accounts Mr. Hinzpeter left behind gave few details about Mr. Kim, and the version that appears in “A Taxi Driver Korean Movie” — played by Song Kang-ho, one of the country’s best-known actors — is mostly fictionalized. Like Mr. Hinzpeter, the film’s producers tried to find Mr. Kim. They said that they contacted every older South Korean they could find named Kim Sa-bok — a fairly uncommon name — but that none turned out to be the driver. Interest in the movie has made the name one of the most searched-for terms in the country.

On 5th August 2017, Kim Seung-pil, son of Kim Sa-bok came forward, producing photos and documents verifying his father’s identity. His father was not strictly a taxi driver but a man who mainly worked with foreign reporters because he owned two private vehicles used as “hotel taxis.” It was revealed that Mr Kim did not come forward as he had passed away in 1984 due to cancer, four years after the Gwangju events. 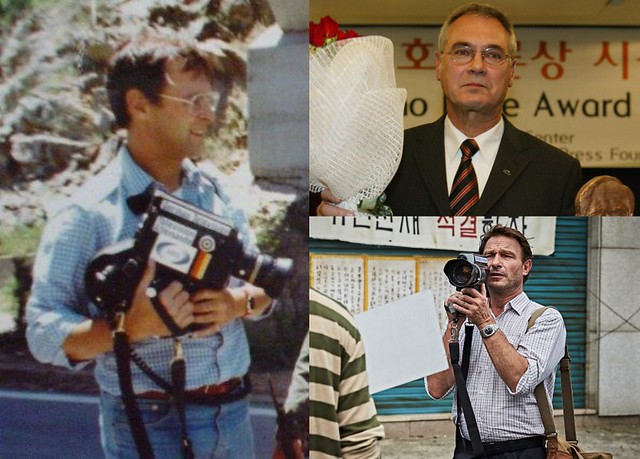 Mr. Hinzpeter was honored with awards by South Korean journalist associations and civic groups, he often spoke of Mr. Kim. He said he wanted to ride again in Mr. Kim’s cab through the streets of a “new Korea,” a vibrant democracy. Shin Nan-ja, 75, who worked for Mr. Hinzpeter after the uprising, said he asked her repeatedly to find him. But the searches went nowhere. The late Hinzpeter is known to have been delighted at the news of the production of the film. He died last year at 78, and he was said to have requested in his will to be buried in Gwangju. Articles of his body including hair and nails were enshrined in the 5.18m memorial cemetery in Gwangju when he died in May 2016. 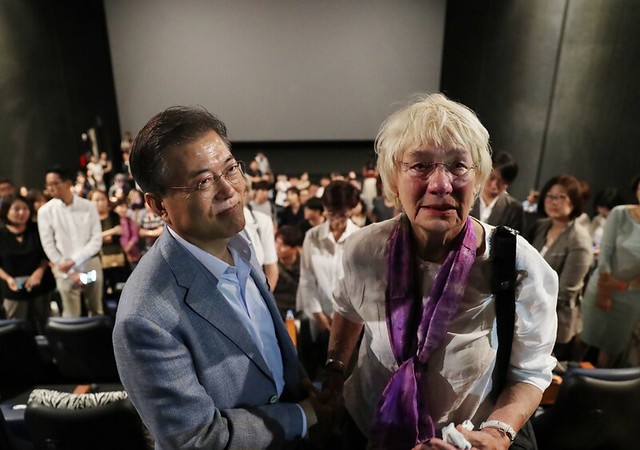 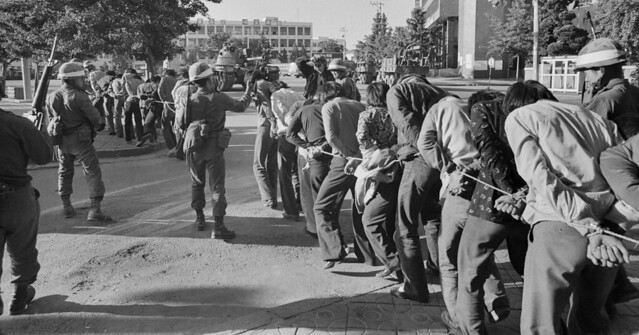 The Gwangju killings were a painful landmark in South Korea’s long, tumultuous journey to democracy. Mr. Chun Doo-hwan, an army general who had seized power in December 1979 after the assassination of President Park Chung-hee. He was tightening his grip in May, declarinh martial law across the country, shut down universities and Parliament, and arrested opposition leaders. In Gwangju, a midsize southern city, protesters took to the streets on May 18, and soldiers opened fire.

Nearly 200 people, including about 20 soldiers, were killed in Gwangju, by the official count, though civic groups and bereaved families have suggested that the toll was much higher. The junta blamed “vicious rioters” and “communist agitators” for the casualties, saying the military had been there only to protect people. 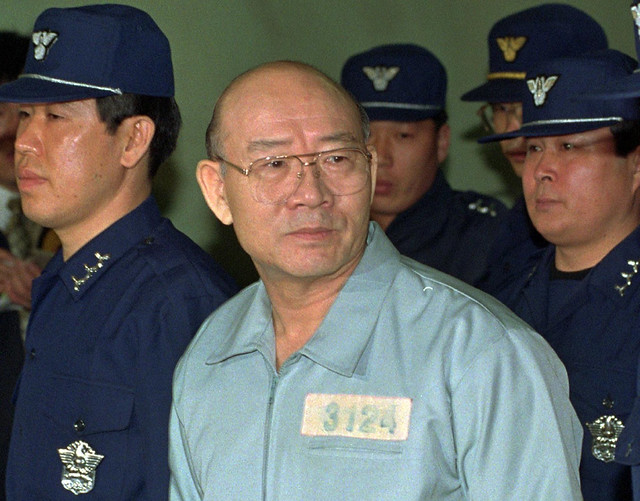 For the remaining years of Mr. Chun’s rule, tear gas, Molotov cocktails and shouts for democracy rocked the campuses, as students clashed with the riot police. The dictator finally agreed to a democratic overhaul, including free elections, in 1987. In the late 1990s, Mr. Chun was convicted of sedition and mutiny in connection with the 1979 coup and the Gwangju killings. Chun was sentenced to death in 1996 for his role in the Gwangju Massacre, but later pardoned by President Kim Young-sam with the advice of then President-elect Kim Dae-jung. Yes, he’s still alive now.

Cho Yong-pil (조용필) is one of the most influential figures in Korean pop music, born in 1950. He usually does not allow films to use his music, but he allowed ‘A Taxi Driver’ to use his former hit song ‘Short Hair’ upon knowing that the movie was based on true events and acted by Song Kang-ho. The Akdong Musician did a remix rendition for the movie.

A Taxi Driver Korean Movie (택시운전사) is out in cinemas on 7 December 2017.