Nine years ago, on a stormy night novice journalist Chi witnessed a car accident on the hill when his car broke down. In that fatal accident, the male driver was killed on the spot, and the female passenger Hsu Ai-ting slipped into a coma when she was rushed to the hospital. In a panic, Chi took photos of the registration number of the hit-and-run vehicle. However, the pictures were so blurry that they could not be used as evidence, and therefore the facts of the accident were never established.

Driven by his guilt about not being able to help Hsu nine years ago, Chi is determined to make it up to her. Nonetheless, Chi is completely unaware that he has been watched and followed, and that mysterious man quietly abducts Hsu shortly after. Apparently, Chi is not the only witness to the car accident…

If you have heard of this English folk song which the film was named after, you will most probably be able to infer that there might be more than one “murderer” and how each involving character might either know only part of the the truth or revealing partial truth to deny their involvement in the incident. This is very similar to a China variety show “Who’s The Murderer”《明星大侦探》Peps and I had been following for months and very much enjoyed.

If you are a fan of Sherlock Holmes, Detective Conan, and love using your brain to guess and unravel the mystery of a crime during a movie, this definitely deserve every single cent of the ticket. The story started out a little odd and puzzling (pun intended) initially, and me being an impatient audience was on the verge of pulling my phone out to google for the synopsis of the story. Luckily, I caught on after a while, realizing that the incoherent plots and contradictions were exactly what the editor want us to notice. While I love the storytelling and the editing,  I had to admit that the audience will definitely need some patience and a sharp eye to spot some odd behaviour as well as a good memory to recall what happened before as there won’t be much “flashbacks” for the audience to piece the puzzles together.

The film make use of many realistic yet unique filming methods which makes my hair stand on end without any over-the-top CGI or jump scares. The blinking red eye of the car-crash victim reflected against the broken wing mirror was one of the most memorable example. This is perhaps one of the few rare movies which advocate safe driving with the countless examples of car accidents that happens when you text and drive, drink and drive as well as fooling around when driving. The clear side profile of the driver when he was occupied gives the audience the impending threat the driver was in and made me squirm in my seats and yearning to warn the characters at the same time. 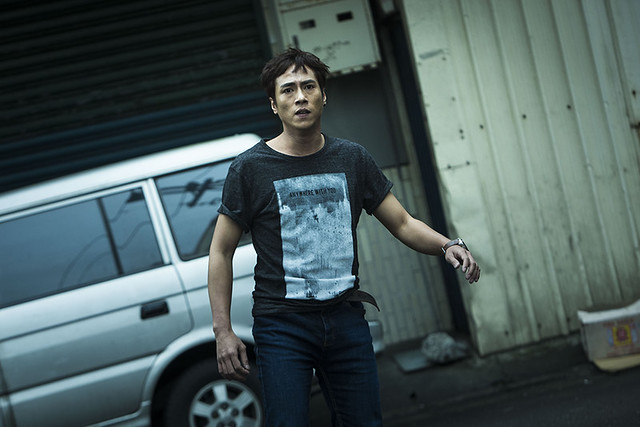 This is a movie and a story without any real protagonist. Every individual is hiding his own secrets and no one is a saint. I had to applaud for the strong cast as they all managed to bring out the story of their characters brilliantly. Kaiser Chuang turned from the perverted teacher in The Tenants Downstairs to a popular journalist Chi, aka the main lead, whom lost his job suddenly due to his errant reports. He had a sharp gaze which made him a controversial character. There were moments when I wonder about his motive for being overly enthusiastic on a hit-and-run accident he witnessed 9 years ago. And indeed, no man is perfect here.

I enjoyed watching the dynamics of the different characters, how their fates intertwine because of a single accident. It is somewhat like the butterfly effect, how everyone thought that their little action, or seemingly harmless reaction resulted in the chain of grim incidents 9 years later. It also felt like watching karma doing the job. I shan’t spoil the fun by revealing the cases, but try watching how every character receives what they deserve! 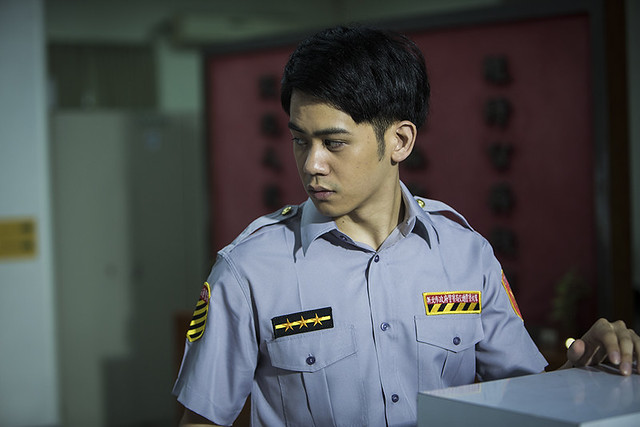 Mason Lee’s portrayal as a junior police was perhaps the most surprising character of all, simply because of his insignificance from the start. When the character reappeared, it took me a while before I put two and two together and realised that he was the quiet police hovering around earlier.

The plot is not without loopholes. One particular part which got me confused was the suddenly suicide of Chi’s mechanic and buddy Ji. I wouldn’t be surprised if it was actually a murder made to look like a suicide, but nothing was explained and the matter was put aside when more perverse happenings took the limelight. Nitpick aside, this is definitely a feel-bad (instead of feel-good) movie, exposing the dark (but realistic) side of human nature, and I can assure that everyone will definitely be surprised by the twists.

The Chinese title 目击者 coincides with 2012 China movie 目击者 Witness, while the english name “Who Killed Cock Robin” is a murder archetype in a nursery rhyme/ British folksong. 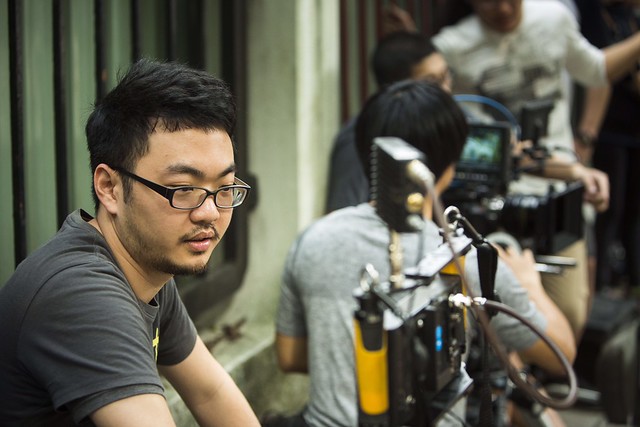 Tiffany Hsu and Director Cheng Weihao collaborated for the second time after The Tag-along (紅衣小女孩) Movie, this time moving from horror to thriller. The director took 4 years to prepare this piece of work, he insisted in completing the script, and kept the plot a secret for a long time. 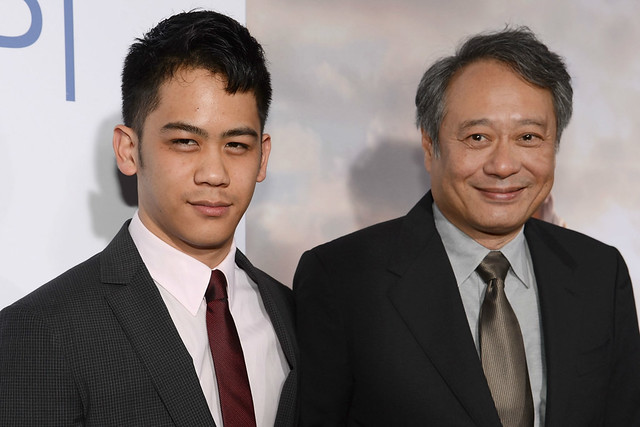 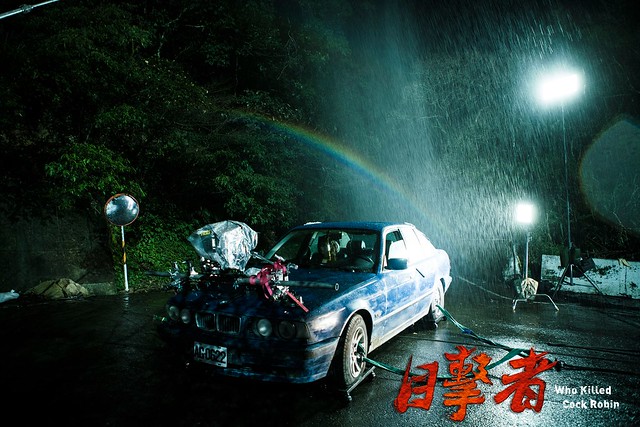 When filming the raining car-crash scene in the mountains, the weather turned really cold. The incident was supposed to take place during summer, and the characters were required to act in the rain for 5 consecutive days, so when the director realised that the cast were all emitting breath vapor while running their lines, he requested everyone to drink cold water to prevent that. 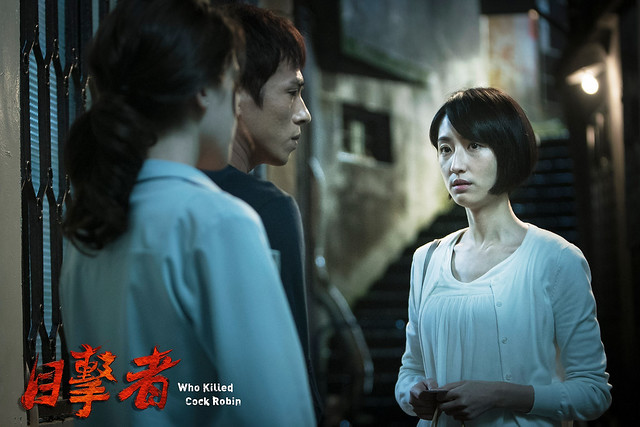 Both female leads claimed that the pressure was immense when they took up the roles. Tiffany Hsu had insomnia for days, while Golden Bell Awards best TV Actress award winner Alice Ko (柯佳嬿) regretted taking up the role and questioned herself why did she take up the project to torture herself.

If you’ve seen the movie, do let me know what you think of the film in the comment section below. If you agree/disagree with my review, feel free to comment and let me know!