To boost the standard of Singapore basketball, Long, a magnate and known figure in the basketball scene decided to fund the import of young talents from China, hoping to reinvigorate the sport in Singapore and create the next Yao Ming.
Away from home the first time, the young squad of Chen Hang, Shaohua, Dadi, Xiaodi and Gao Ming have to overcome many challenges while integrating into Singapore, both on and off court. Junhui, born and bred in Singapore, does not see eye to eye with his foreign teammate Chen Hang. Apart from the vast difference in height and basketball skills, there is also a stark difference in their sense of identity and belonging. 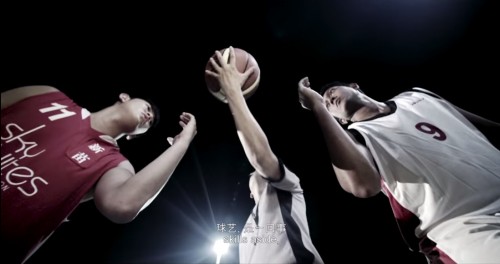 I was VERY excited before watching this movie, simply because I’ve watched Director Tay’s short film “Brothers” 2 years ago and liked the way he brought out certain subtle messages through his cinematography. So when news was out that he was going to direct this film, I was looking forward to see what can he do to turn a sports-genre film into his own style.

Since the film is not officially out yet, I will try my best to give a proper review without spoiling too much, k? Those who have watched the movie, feel free to discuss about the movie below! 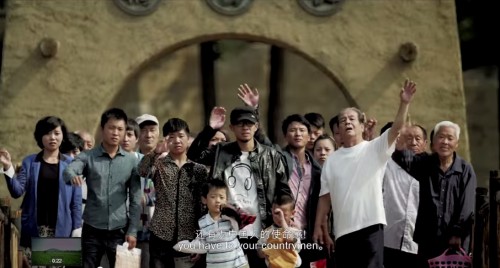 “再见巨人” could mean “Meeting the Giant”, or “Goodbye, Giant” in Chinese. I never thought too much of this title till I watched this movie. At the start of the show, it was “Goodbye, Giant”, then it turned into “Meeting the Giant” later on. I love the way the director brought out the height of the players. Initially, I thought it was the usual method of building anticipation by showing only certain features of main lead without showing his face. The point of revelation (revealing of the face) made many people laugh, when they were once again “tricked”, but it was only then, it dawned upon me that “tall” message the director was trying to deliver.

It is easy to bring out the height of the basketball players if there were comparison, (like having me standing by them :P) but when all of them are 1.8m and above, all of them didn’t look as tall on screen without any comparison. So rather than using height contrast, the director used many other ways to bring out the players’ height difference from the normal people (If you haven’t caught the movie, go watch it and count how many you can spot. Hint: one of them was the use of double deck bed).

I discussed with my movie-partner-of-the-day, dear Kenny who had rushed down to the cinema just half an hour before the show because of my last minute notification, what he liked/disliked about the movie. He find the lack of focus on a single main character, a little hard to concentrate. However, I beg to differ. I thought the move to give almost equal attention to the 6-7 main characters brought out the importance of team work in a basketball team, emphasizing on the point how no one should be taking the limelight. 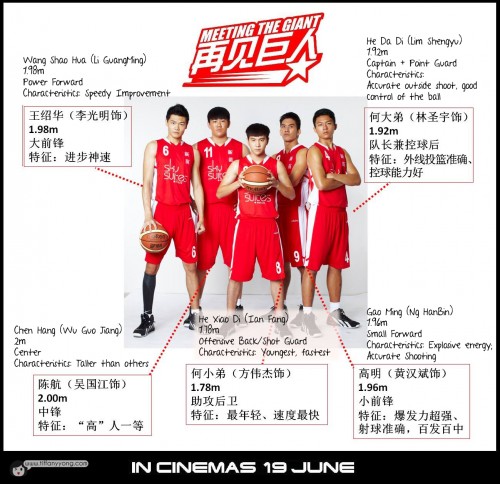 I’m usually skeptical about using too many non-actors in a film, but here I was impressed how the director managed to find players to fit the characters, so much that I could hardly feel “acting” within the film. Shao Hua, the ambitious one, who feels that one should work hard for what he wants; Chen Hang, the quiet giant who was willing to sacrifice himself to blend in to the crowd; Gao Ming, the rash player with a “violent” past; He Xiao Di, the cheerful one and He Da Di, the stable and matured elder brother, the two brothers who made me cry a lot. Of course, not to forget Jun Hui, the “narrator” of the film, the third party viewer of the whole event with his little crush. I can go on talking about the veterans including Choo Hou Ren, the China coach Wang Shuo, etc, whose experienced and stable acting skills supported the group of “newbie” players/actors. I can’t help but add in: I really like the part where Jun Hui’s Dad (Captain Wu – Qin Wei) was sandwiched front and back by the sponsor (Choo Hou Ren) and the parent (Johnny Ng), thumbs up for the use of monochrome filming! 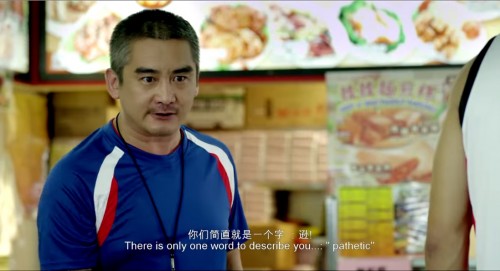 The two different age group of actors/ characters showed the different level and types of stress they are receiving. The young players from China beared the responsibility of being a professional basketball player with the aim to score for the “company” (micro), while the veterans received pressure from the media, the sponsors, the parents and the public (macro).

While some might disagree with my ratings (as I gave Spiderman 2 a 4.5 too), I wasn’t comparing it to a blockbuster. Perhaps the exact reason why I like the film was the nostalgic memories it brought me, bringing me back to the days when my schoolmates and I were crazy about basketball because of the Taiwanese Drama, My MVP Valentine (MVP情人) in 2002. In Meeting the Giant 再见巨人, I like how the director used slow-motion to enhance the anticipation and adrenaline of the matches and did not exaggerate the basketball moves with special effects or stunts. 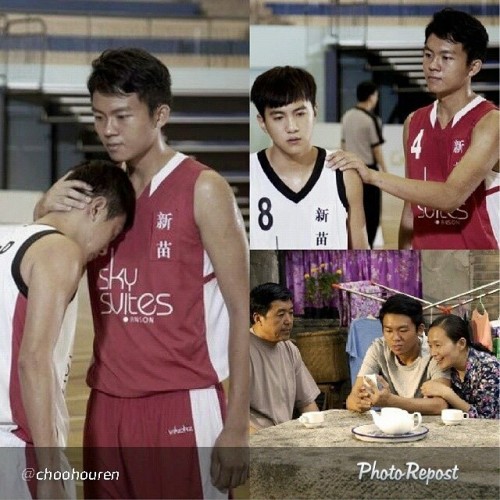 I noticed an interesting trend during the premiere. There were a few touching moments when there were audience laughing at. It was surprising for me as I was actually crying at those moments. I won’t try say what are those scenes, but (hint hint*) when I think of the scenes of Lim Shengyu (He Da Di) and Ian Fang (He Xiao Di), they still bring tears to my eyes now.

I think I can go on and on talking about what I like about the film and what touched me, but the song “就在这里” sang by the director, Tay Ping Hui himself, was the song that made me cried the most, so much that I waited for the credits to roll and take a screenshot of the song title so that I could look for it online (The video -below wasn’t out at the point of time when I was watching the premiere)

So where did the 0.5 marks go? I had to say, if I have to talk about the one thing I didn’t quite like about the film, it will be the voice-dub. Yes, it was a necessary move as the some of the characters were supposed to be from China but they were acted by Singaporeans. However, I guess there were some voices which did not really match the look of the characters. According to Kenny (my movie partner), he was unable to feel for the characters because of the voice. Well, I guess this will most probably only matter in Singapore as most of the overseas audience will not know the original voice of the actors (hopefully).

But all in all, this is by far, my favourite, out of all the local films I’ve watched, so I do highly recommend everyone to watch it! If you are not from Singapore, but will be interested to watch, do provide some feedback here for the producers’ consideration!

P.S. Because of my passion in acting, there are so many more things I wish to write about, but this review is getting a tad too lengthy. To know more about the characters’ profile, do follow producer Choo Hou Ren’s Instagram (@choohouren)! Will try to provide English translation! 🙂

Below is just a brief Chinese version of my review for my China friends! 🙂 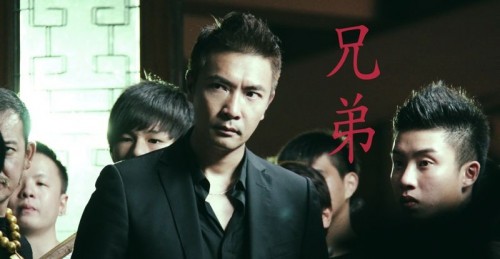 Meeting The Giant may be Tay Ping Hui’s first complete directorial debut, but he had previously directed a short beta 13 min TV film called Brothers 兄弟 where he and Zheng Ge Ping starred in.
虽然这是郑斌辉执导的处女电影，但他之前也有自编自导自演一部13分钟短片叫《兄弟》

“Meeting The Giant” is inspired by an interesting occurrence in the early 2000s where talented sportsmen from overseas were brought to Singapore and groomed to play for the city state.
《再见巨人》故事灵感来自于真人真事，2000年早期新加坡引进了外来人才，栽培他们，让他们替新加坡参加比赛。 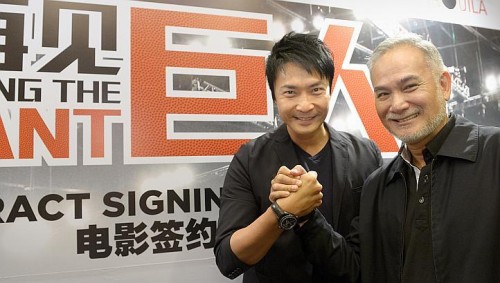 Veteran actor, Choo Hou Ren had nurtured the idea of the film for 10 years, before managing to secure local movie producer and distributor Clover Films and a renowned entertainment company from China, Stellar Megamedia International, as investors. Also on board are Aquila Energy, which is owned by HK Choo, Houren’s younger brother, and local telco StarHub.
《再见巨人》是朱厚任孕育十多年的一部电影，后来因为得到了厂商赞助，才得以开拍。参与的有朱厚任的公司雄厚制作、本地的Clover Films与来自中国具有非常大影响力的星美集团首次合作制作的电影。

The production of the film cost approximately S$1.5 million.
制作成本120万美元（约150万新元）

While the producer took 10 years to prepare for the film, director Tay Ping Hui joked that he took only 10 minutes to agree to direct.
郑斌辉导演曾开玩笑说制作人花了10年筹备，他10分钟就答应导戏了。

Behind The Scenes and Interviews 幕后花絮/采访